iPhone X Vs iPhone 8: How Do Apple's New Phones Compare? 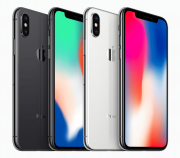 Apple started taking pre-orders for the much-anticipated iPhone X on Friday at 12 a.m. PDT, a month after the iPhone 8 and iPhone 8 Plus were released. Now that all smartphones are available, some customers might be debating which one out of the three new iPhones they should get. All three devices were revealed in September at the Steve Jobs Theater Tuesday in Cupertino, Calif. The iPhone X is now available for pre-order in 55 countries and territories, while the iPhone 8 is available in stores and online.

The new iPhone might have been revealed in new pictures, as leaks begin to emerge before it is finally released this autumn. More details are becoming to clear about the wide line-up of phones that Apple is expected to launch in September, and which will replace the iPhone 8 and X. Apple has been reported to be planning not just one or two new iPhones, but three. And the new pictures claim to be a look at two of them: not just the updated version of the iPhone X, but a long-rumoured Plus-sized model. The 6.1-inch model shown in the photos is thought to be the less premium of Apple's three handsets.

Apple revealed its new iPhone lineup Tuesday, which includes the iPhone 8 and iPhone 8 Plus. If you don't plan on spending $1,000 for the iPhone X but might be looking at the iPhone 8 and iPhone 8 Plus, there are some features that are worth pursuing an upgrade. The iPhone 7 comes with an A10 Fusion chip and an M10 motion coprocessor. The device has a battery life up to 2 hours longer than the iPhone 6s, with up to 12 hours of internet usage on LTE. The iPhone 8 will come with Apple's new A11 Bionic chip, which Apple Senior VP Phil Schiller called "most powerful and smartest chip ever in a smartphone."

As iPhone 12 arrives, Apple cuts the price of these two older models

The price of the $999 iPhone X is unprecedented, Apple's history shows

Apple Inc. showcased its latest iPhones -- the iPhone 8, iPhone 8 Plus and iPhone X -- on Tuesday in a much-hyped product unveiling held for the first time at the Steve Jobs Theater at its Cupertino, Calif., campus. An update of the company's signature gadget, now in its 10th year, was the most anticipated part of the keynote address, and it could have big ramifications for the smartphone industry as a whole. There was news about the Apple Watch and the Apple TV too. The price of the $999 iPhone X is unprecedented, Apple's history shows With the iPhone X -- Apple's new premiere gadget -- starting at $999, the Cupertino, Calif., technology giant has broken new ground when it comes to pricing. Even for Apple, which isn't known for its low prices, the jump to $1,000 phones is a major shift.