President Donald Trump could be weighing the termination of special counsel Robert Mueller from his oversight of the federal Russia investigation, Christopher Ruddy, CEO of the conservative Newsmax Media and a friend of President Trump, told PBS NewsHour's Judy Woodruff on Monday. WASHINGTON -- The top Democrat on the House Intelligence committee says Congress would not sit still if President Donald Trump decided to fire the special counsel leading the investigation into Russian interference in the U.S. election and possible collusion with Trump's campaign. Rep. Adam Schiff, a California Democrat, says such a move would "be the last straw" for many in Congress and would have "echoes of Watergate," when President Richard Nixon dismissed special prosecutor Archibald Cox over Cox's subpoenas for White House tapes. Trump's allies have begun raising questions about special counsel Robert Mueller's impartiality -- he's a former FBI director who has worked with fired FBI Director James Comey -- and floating the idea that Trump might replace him. Schiff says that if Trump fires Mueller, Congress might name its own independent counsel to investigate the case. 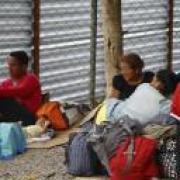 WASHINGTON – U.S. President Donald Trump said on Monday he was worried that any statements under oath he provides to special counsel Robert Mueller could be used to bring perjury charges against him as part of the probe into Russia's electoral interference. In an interview with Reuters, Trump echoed the concerns of his top lawyer in the probe, Rudy Giuliani, who has warned that any sit-down with Mueller could be a "perjury trap." The president expressed fears that investigators could compare his statements with that of others who have testified in the probe, such as former FBI Director James Comey, and that any discrepancies could be used against him. "Even if I am telling the truth, that makes me a liar," Trump said. Despite his concerns, Trump did not comment on whether he would ultimately agree to an interview with Mueller, who is, among other things, investigating whether Trump's campaign team colluded with Russians during the 2016 election and whether Trump has obstructed justice in the probe.

White House counsel Don McGahn will leave his position following the likely confirmation of Supreme Court nominee Brett Kavanaugh this fall. President Donald Trump announced the news in a tweet Wednesday morning, shortly after Axios first reported that McGahn was planning to leave and hoping that Emmet Flood, who advised President Bill Clinton during his impeachment proceedings, would succeed him. White House Counsel Don McGahn will be leaving his position in the fall, shortly after the confirmation (hopefully) of Judge Brett Kavanaugh to the United States Supreme Court. I have worked with Don for a long time and truly appreciate his service! News of McGahn's upcoming departure follows a report that McGahn has cooperated extensively with special counsel Robert Mueller's investigation, answering nearly 30 hours of questions about whether Trump has obstructed justice.

President Donald Trump has openly declared war on Robert Mueller, the special counsel investigating the Russian saga. The president clearly wishes he could fire Mueller; his associates say he's mused about that for weeks. There's plenty of other craziness billowing from the White House: lawyers considering whether the president can pardon himself, the president publicly denouncing his attorney general for failing to protect him. But the clearest portent of a crisis is the president's increasingly evident desire to be rid of the meddlesome prosecutor, who appears to be doing his job too well. The trigger: Mueller's investigators have reportedly begun looking for evidence of Trump family business deals with Russians -- deals the president says never existed.

Giuliani says his team communicated with Mueller's team on BuzzFeed News article, agreed much of it false

President Trump's attorney Rudy Giuliani says he commends Special Counsel Robert Mueller's team for'standing up for the truth'; chief intelligence correspondent Catherine Herridge reports. President Trump's attorney Rudy Giuliani told Fox News on Monday that his team communicated with Special Counsel Robert Mueller's office about last week's BuzzFeed News article alleging that Trump ordered his former lawyer attorney Michael Cohen to lie to Congress -- and agreed a significant portion of it was false. BuzzFeed reported that its sources had seen texts, emails and other documents confirming the allegations that Trump directed Cohen to mislead lawmakers about the timing of discussions with Russian government officials over a proposed Trump Tower project in Moscow, though BuzzFeed's reporters never saw the evidence for themselves. Giuliani disputes that the evidence even exists. "We commend them for standing up for the truth," Giuliani said, referring to Mueller's team.