The U.S. has broken its own energy record: 10 percent of all electricity generated in the country in March came from wind and solar power, according to a recent report from the U.S. Energy Information Administration. The number is up from last year, in which wind and solar power generated an annual average of seven percent of the country's electricity, the report from Electric Power Monthly shows based upon March. Where and When Is Wind And Solar Power Generated? Wind patterns are different, depending on the location. States like Texas and Oklahoma and others in the region typically have the highest output in spring months.

How Big Can A Solar-Powered Drone Be?

Put solar panels on a drone and it doesn't even need a battery. That's exactly what students made at the National University of Singapore. Without a battery, you could fly a drone like this as long as the sun keeps shining. It's awesome (assuming your motives are pure). But if you watch the video, you'll notice immediately that the drone is as thin as a sheet.

Georgia Power Shoots for the Sun to Increase Solar Energy

Georgia Power is seeking contracts with them to provide solar power to customers at a fixed price for a period of five to 35 years.

Solar power is the fastest growing source of global energy

Solar power was the fastest-growing source of global energy last year, overtaking growth from all other forms, according to the International Energy Agency (IEA). The spurt is largely attributed to lower prices and changing government policies encouraging a shift away from traditional power sources, such as coal. China, for example, has played an important role in renewable energy's prominence, accounting for almost half of all new solar panels installed worldwide. Many experts are heralding a "new era" in solar photovoltaics (PV), anticipating that solar PV capacity growth will be higher than any other renewable technology up until 2022. In fact, the IEA has admitted it had underestimated how fast green energy was growing, noting that many countries are set for a solar boom in the coming years. 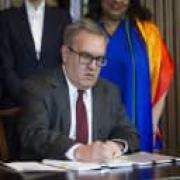 LOS ANGELES – California became the first state in the nation to require homes built in 2020 and later be solar powered, following a vote by the Building Standards Commission. The unanimous action on Wednesday finalizes a previous vote by the Energy Commission and fulfills a decade-old goal to make the state reliant on cleaner energy. "These provisions really are historic and will be a beacon of light for the rest of the country," said Kent Sasaki, a structural engineer and one of six building standards commissioners. "(It's) the beginning of substantial improvement in how we produce energy and reduce the consumption of fossil fuels." While nobody spoke Wednesday in opposition, the commission received about 300 letters opposing the mandate because of the added cost, the Orange County Register reported.