Poker pros are latest losers in battle of man versus machine

The latest battle between man and machine is being played out on the poker tables of a Pennsylvania casino, and so far humanity is losing. An artificial intelligence computer program called Liberatus has accumulated winnings of almost $800,000 against a team of professional poker players at the Brain Vs. Liberatus, developed by Carnegie Mellon School of Computer Science, is aiming to be the first computer program to win a professional poker tournament--a game considered by many AI researchers to be one of the hardest for computers to beat humans at. Artificial intelligence advances in recent years have seen computers master and eventually outperform the best human players at games including Chess and the game show Jeopardy!. In 2016, researchers at Google's DeepMind developed a system that was able to beat champion Go player Lee Sedol--a significant step for artificial intelligence. 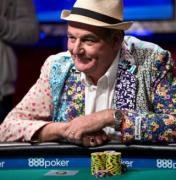 A grandad from East Yorkshire has won $2.6m (£2m) by finishing fourth in the world's most prestigious poker tournament. John Hesp, 64, of Bridlington, made it to the final table of the main event at the World Series of Poker (WSOP). The grandfather of seven swapped his local casino in Hull for Las Vegas to take part in the 7,221-player contest. Mr Hesp's progress captivated the poker world, with many of the game's biggest names rooting for him to win. The semi-retired businessman, who paid $10,000 (£7,000) to enter the tournament, won admirers for his colourful dress sense and cheerful demeanour at the table.

Any poker player with a winning bankroll will tell you that to become a true great at the table, you uncover what opponents are trying to hide -- noticing a slight physical tic, or the way one shuffles their chips, or even how they breathe. Those "tells" can reveal as much to an elite poker pro as if their opponent turned over their hand and showed them their cards. The best of the best understand and play the game on a level few will ever truly achieve. And a bunch of them just got their asses kicked by an advanced artificial intelligence program. As reported by New Scientist, the AI program Libratus from Carnegie Melon University has now bested four professional players after 120,000 hands in a 20-day, no-limit Texas Hold'em heads-up tournament (the AI played directly against one player at a time, with each rotating through).

Facebook has achieved a major milestone in artificial intelligence (AI) thanks to one of its systems beating six professional poker players at no-limit Texas hold'em. The Pluribus AI defeated renowned players including Darren Elias, who holds the record for most World Poker Tour titles. Beating poker pros has been a major challenge for AI researchers, as the best players need to be good at bluffing and unpredictable. "Playing a six-player game rather than head-to-head requires fundamental changes in how the AI develops its playing strategy," said Noam Brown, a research scientist at Facebook AI. "We're elated with its performance and believe some of Pluribus's playing strategies might even change the way pros play the game." The breakthrough comes two years after an AI algorithm developed by Google-owned DeepMind helped a computer beat a human champion at the notoriously complicated board game Go for the first time.

Poker appears to be the latest intellectual battle between humanity and AI, and currently, a bot named Libratus, developed by the Carnegie Mellon School of Computer Science, is beating humanity. A team of professional poker players are competing against Libratus at the Brains Vs. Artificial Intelligence competition held at Rivers Casino in Pittsburgh, running through January 31st, 2017. As of January 26, with 80% of the 120,000 hands dealt, Libratus is ahead by over $1,000,000. Note: No money actually changes hands in this tournament.