Nebraska Session Nears an End With Push for a New Session

Speaker of the Legislature Jim Scheer told lawmakers Wednesday that they will receive a certified letter asking them whether they want to convene a special session to try to lower property taxes. An attempt to reach a compromise over the weekend failed. 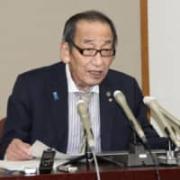 The government and ruling camp are planning not to extend the current extraordinary session of the Diet, which is scheduled to end on Dec. 9, sources in the administration said Thursday. Enacting important bills, including one to ratify a recently signed Japan-U.S. trade agreement, without extending the session is possible, the sources said, adding that an extension is unnecessary also because the ruling bloc has given up on passing a controversial bill to amend the national referendum law during the ongoing session. "In principle, there's no need to extend the extraordinary session once the trade pact ratification bill is passed," a senior official of Komeito, the coalition partner of the ruling Liberal Democratic Party, said. "The Diet session won't be extended unless a very urgent issue comes up," an LDP official in charge of parliamentary affairs said. The House of Councilors launched full-fledged debates on the trade bill Thursday, at its Foreign Affairs and Defense Committee, after the House of Representatives passed it Tuesday.

Louisiana is expected to bring in $648 million less in the budget year that begins July 1, because of expiring temporary taxes. Edwards called special sessions in February and May aimed at filling the shortfall. Both collapsed without closing the gap.

I agree with Gov. Bevin on the severity of the pension crisis, and I appreciate his sense of urgency in trying to solve it. But I think it's important to set the record straight that legislative leaders tried very hard to convince him not to call that special session,