Insights Into AI Adoption In The Federal Government

Wherever that will lead is, at the time of the writing of this article, still not certain, but regardless of the direction, it's clear that advancing progress with artificial intelligence is a key strategic element for both major parties. Over the course of the past few years, governments around the world have taken strong positions on advancing their strategies around AI adoption. Certainly heading into the new year it seems that the pace of adoption won't be slowing any time soon. At the recent Data for AI conference, we had an opportunity to get insights into how the government plans to continue and accelerate its adoption of AI in an interview with Ellery Taylor, Acting Director of the Office of Acquisition Management and Innovation Division, at the US General Services Administration (GSA). In this article he shares his outlook for the future of AI and how it is being adopted in the government.

Last month the Congressional Subcommittee on Information Technology began a three-part series of hearings to break through the myths and the hype to gain a real understanding of Artificial Intelligence (AI) and the role it can play in the Federal government. While the first hearing focused on industry and academic experts, Wednesday's hearing saw testimony exclusively from government leaders, including representatives from Defense Advanced Research Projects Agency (DARPA), General Services Administration (GSA), National Science Foundation (NSF), and Department of Homeland Security (DHS). During the hearing one point was raised that bears repeating–AI isn't science fiction, its science reality. "When people hear'artificial intelligence,' their minds often wander to the realm of science fiction," said Keith Nakasone, deputy assistant commissioner, acquisition operations, Office of Information Technology Category, GSA. "There is also a belief that AI is in the future, rather than in the present.

Artificial intelligence (AI) deployments in the Federal government are already making government smarter, based on examples shared during the second of a three-part series on AI launched last month by the House Subcommittee on Information Technology. Federal agency leaders from the Defense Advanced Research Projects Agency (DARPA), the General Services Administration (GSA), National Science Foundation (NSF), and Department of Homeland Security (DHS) discussed how AI is being implemented to improve the mission of their agencies and what is required to ensure the technology continues to be viewed as a problem solver. Cautioning against overstating its capabilities and suggesting that AI research should begin with a problem that must be solved, John Everett, deputy director, Information Innovation Office at DARPA said, "I think there's a temptation to think of AI as magic, and capable of solving all our problems." "When it comes to implementing something that would be effective for the Federal government, I think it's important to take the perspective of first understanding what the actual problems are and then working our way back on how AI can actually address those problems." James Kurose, assistant director of NSF for Computer and Information Science and Engineering noted that AI research required experts to impact mission.

How the (Likely) Next NSA/CYBERCOM Chief Wants to Enlist AI 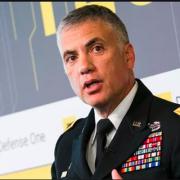 The Army general likely to be tapped to head U.S. CYBERCOM and the NSA has some big plans for deploying cyber forces and using artificial intelligence in information attacks.

How the (Likely) Next NSA/CyberCom Chief Wants to Enlist AI 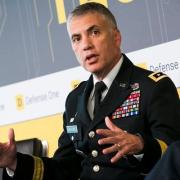 The Army general likely to be tapped to head U.S. Cyber Command and the NSA has some big plans for deploying cyber forces and using artificial intelligence in information attacks.