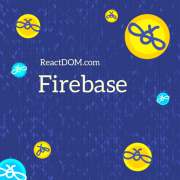 Firebase is a Backend-as-a-Service platform that allows you to develop mobile and web application first introduced in 2011. It was acquired by Google in 2014. Starting with Firebase by Stone River eLearning will teach you how to code a Firebase application. No previous Firebase experience is required. This Firebase tutorial will teach you what Firebase is all about.

Google turns Firebase into its unified platform for mobile developers

Google offers a plethora of cloud services that mobile developers can use to power their apps. With Firebase, which it acquired in 2014, it already offered developers a dedicated platform and SDK for building mobile apps; today it is greatly expanding this service by launching a number of new features and integrating the service deeper into the rest of its cloud tools. The new Firebase, which the company announced at its I/O developer conference today, takes the service's existing features and expands upon them. In its previous incarnation, Firebase was somewhat similar to Facebook's now-defunct Parse in that it offered a database service, user authentication features and hosting tools. In this new version, Firebase takes many of Google's existing developer tools, like Google Cloud Messaging, and combines them with new and existing Firebase services.

Make your Android Applications smart, use trained model or train your own models explore the power of AI and Machine Learning. This course was recorded using Android Studio 3.6.1 (which is a great introduction to the development environment!) For a smooth experience I'd recommend you use the same, but students can still use the latest Android Studio version available if they prefer! But until I work out how to build a time machine. I have a course named "Machine Learning for Android Developer using Tensorflow lite" on udemy.

The new tools in Firebase are unified by a new and free Firebase analytics platform and dashboard. Google has channelled its many tools for developers into a revamped version of Firebase, which now becomes a one-stop shop for building, managing and monetizing Android, iOS, and web apps. Google acquired Firebase in 2014, as an application cross-platform backend service that included a real-time database, user authentication, and hosting. The new Firebase, announced at Google's I/O conference, integrates a host of existing Google cloud services with Firebase, such as Google Cloud Messaging, fleshing out Firebase to a platform of 15 products and integrations, all aimed at helping developers build apps, attract users and earn revenue. With the new Firebase, Google is aiming to improve the experience for its community of mobile app developers, which has grown from 110,000 since 2014 to over 450,000, according to Firebase product manager, James Tamplin.

Along with all of the new features, Firebase is also getting a revamped developer console for managing apps, which also includes deeper ties into Google's other dev products. And for those unfortunate instances where your app stumbles, you can implement Firebase Crash Reporting so users can send details of their crashes back to you. Google is also rebranding its Cloud Test Lab, an environment for testing out your app before it goes live, as Firebase Test Lab. None of this might sound exciting if you're not in the business of app development, but it could lead to better mobile experiences for all of us down the line. Firebase is a cross-platform service, so it's not just devoted to Android apps, and it now has has more than 470,000 developers signed up for its service.