Microsoft is pulling out of the "feature" phones business. But its Nokia-branded handsets - which are powered by the Series 30 operating system, making them less powerful than its Lumia Windows phones - will continue to live on. The division that makes them has been acquired by HMD Global, a new private equity-backed firm, and Foxconn subsidiary FIH Mobile. Nokia said it had signed a 10-year deal for them to continue using its name. "Feature phones were never a core part of Microsoft's strategic aim behind the purchase of Nokia's devices business," commented Ian Fogg from the IHS Technology research team. 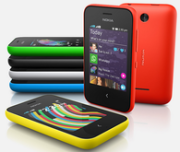 Microsoft's association with the Nokia brand has been especially turbulent, but it appears the company has one last hurrah for its feature phone business. Today, it announced the Nokia 216, a Series 30 handset that can browse the web and lasts up to a month on standby. It's as basic as Nokia feature phones get, but it's notable in that it's probably the very last Nokia-branded handset Microsoft will ever produce. You see, when Microsoft acquired Nokia in 2014, it bought both the feature phone business and Lumia brand. This gave the Redmond company access to Nokia's manufacturing plants, patents and feature phone brand for 10 years.

FILE - This July 3, 2014, file photo, shows the Microsoft Corp. logo outside the Microsoft Visitor Center in Redmond, Wash. Microsoft reports financial results Tuesday, July 19, 2016. Microsoft unveiled what could be one of its last Nokia mobile phones, as it prepares to complete the sale of its feature phone business later this year. On Tuesday, the tech giant announced the Nokia 216, which will be available in India. The device can run two SIM cards, and includes two cameras with LED flash, an FM radio and Bluetooth support for owners wanting to use Bluetooth headsets.

Welcome back, Nokia! Microsoft sells its 'feature phone' business to Foxconn for 350m - and it will resurrect the Finnish brand with Android phones and tablets