The UK's new Space Agency funding will be used to support drones that deliver coronavirus testing kits to a Scottish island. Skyports, the company behind the drones, started a two-week trial in May with NHS Highland, which serves a group of islands off the west coast of Scotland. The technology was able to cut delivery times between Oban and the Isle of Mull to around 15 minutes, instead of going via road and taking a 45-minute ferry crossing. An initial £2.6 million was made available by the UK Space Agency and European Space Agency (ESA) to find and support space-enabled technologies and services that can support the NHS response to coronavirus. Skyports along with two other initiatives have been awarded a share of £1.1 million in funding, while the rest is open to bids until the end of September.

DHL Delivery Drone Is Three Times As Fast As A Car

In flight, the wings pivot 90 degrees, and the drone flies like a plane. This first draft of history is messy. We accept now that the Wright Brothers were the first to achieve powered, human flight, and that they did so on December 17th, 1903. They were hardly the first to experiment with flight, though, and at the time the brother's work was viewed skeptically by many rivals. In the new age of drone flight, video and the internet make success easier to prove, but it's the exact definition of success that's hard to pin down.

Drone Defence Services and the University of Nottingham will develop sensor technology to track aircraft. By monitoring all aircraft, Drone Defence aims to prevent drone misuse and enable drones to safely share the sky with other aircraft.

Uber Eats has unveiled its newest drones which will be used to deliver food in San Diego, California, next year. The new drones feature'innovative rotating wings with six rotors' - a design that has previously only been featured in flying car prototypes. Uber Eats said it believes the rotating wings will help to avoid food spillages, as the design enables a smoother transition between vertical takeoff and forward flight. Today, the company unveiled a new look for its drone, which utilises'innovative rotating wings with six rotors', a design that's usually only featured in flying car prototypes The rotors will be positioned vertically for takeoff and landing, but move into a forward position'for increased speed and efficiency during cruise flight', reports The Verge. NASA veteran Mark Moore designed similar rotors for the company's flying-taxi prototype which is also part of the companies Uber Elevate project - to take its services to the sky.

Medical Cargo Could Be The Gateway For Routine Drone Deliveries 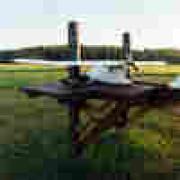