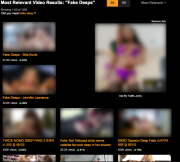 A team of researchers from the State University of New York (SUNY) recently developed a method for detecting whether the people in a video are AI-generated. It looks like DeepFakes could meet its match. What it means: Fear over whether computers will soon be able to generate videos that are indistinguishable from real footage may be much ado about nothing, at least with the currently available methods. The SUNY team observed that the training method for creating AI that makes fake videos involves feeding it images – not video. This means that certain human physiological quirks – like breathing and blinking – don't show up in computer-generated videos.