Why did a Rhode Island police officer pull over a self-driving shuttle on its first day?

Elizabeth Keatinge tells us about Tesla's Autonomy Investor Day where robotaxis were discussed. PROVIDENCE, R.I. – A self-driving shuttle got pulled over by police on its first day carrying passengers on a new Rhode Island route. Providence Police Chief Hugh Clements said an officer pulled over the odd-looking autonomous vehicle because he had never seen one before. "It looked like an oversize golf cart," Clements said. The vehicle, operated by Michigan-based May Mobility, was dropping off passengers Wednesday morning at Providence's Olneyville Square when a police cruiser arrived with blinking lights and a siren.

A self-driving shuttle got pulled over by police on its first day carrying passengers on a new Rhode Island route. Providence Police Chief Hugh Clements says an officer pulled over the odd-looking autonomous vehicle because he had never seen one before. The bus-like vehicle operated by Michigan-based May Mobility was dropping off passengers Wednesday morning when a police cruiser arrived with blinking lights and a siren. It was just hours after the public launch of a state-funded pilot shuttle service. The shuttle offers free rides on a 12-stop urban loop. 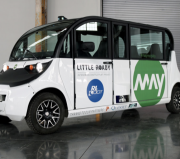 "This is a very exciting day as we kick-off testing of autonomous vehicles, putting Rhode Island on the map as a leader in this new high-tech field in transportation. And we'll do it in a careful and safe manner partnering with institutions of higher education to carefully study and evaluate the service and its integration on Rhode Island roads," said Governor Gina Raimondo. The vehicles are being tested this week on low-volume roads in the park as the beginning phase of a pilot project scheduled to launch in Providence in the spring of 2019. The testing period in Quonset will be followed by similar testing in Providence, prior to the start of service. Between the two locations, the vehicles will undergo 500 miles of testing.

Police: Man 'fooling' on escalator falls to death at mall

PROVIDENCE, R.I. – A man who was apparently "fooling around" and riding an escalator rail lost his balance and fell to his death at a Rhode Island mall. Providence Police Chief Hugh Clements tells WPRO-AM the victim fell one floor, from the escalator at the movie theater level to the food court, at the Providence Place Mall just before 11 p.m. Monday. Clements says the man lost his balance, fell backward, and hit his head on a table. He suffered "massive injuries" and was pronounced dead at the hospital. The victim was a 45-year-old Pawtucket man.

Ariel Moore exhaled sharply and lifted her arms to the sky. "I have arrived alive!" she said to no one in particular. This should not be notable. Moore just took a half-mile ride in a six-seat shuttle, one of several that run in a loop between her office in downtown Detroit and the garage where she parks her car. But on that sunny June day, she and her colleagues at real estate company Bedrock also did something quietly remarkable.