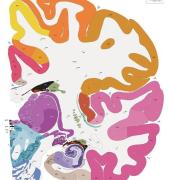 Thanks to deep learning, the tricky business of making brain atlases just got a lot easier. Brain maps are all the rage these days. From rainbow-colored dots that highlight neurons or gene expression across the brain, to neon "brush strokes" that represent neural connections, every few months seem to welcome a new brain map. Without doubt, these maps are invaluable for connecting the macro (the brain's architecture) to the micro (genetic profiles, protein expression, neural networks) across space and time. Scientists can now compare brain images from their own experiments to a standard resource.

Best listening experience is on Chrome, Firefox or Safari. "Ai" used to be a crossword puzzle clue for three-toed sloth, but today it more likely stands for artificial intelligence. In information technology circles, AI is tossed around as a panacea for everything from disease to employee boredom. If you define AI as the application of algorithms that can learn and evolve as they're exposed to new data, the use cases do indeed seem endless. The ultimate goal of AI is machinery that acts autonomously but within bounds -- such as federal policy on this or that.

Google's patented and powerful search algorithm, PageRank, may mimic the way the human brain retrieves information. Our memory for words can be modelled as a network in which each point represents a different word, with each linked to words that relate to it. Psychologist Tom Griffiths and colleagues at the University of California, Berkeley, wondered whether the ease with which the brain retrieves words is similar to the way that websites are ranked by PageRank: by the number of sites that link to them. In tests against other word-retrieval algorithms, PageRank most clearly matched the human model (Psychological Science, vol 18, p 1069). The results suggest human memory studies could be improved by examining the tricks that search engines employ, and vice versa, says Griffiths.

In research described June 26 in Nature Methods, the team, led by Rockefeller's Alipasha Vaziri, used a light microscope-based technique to capture neural activity within a volume of mouse brain tissue at unprecedented speed. The algorithm allowed them to pinpoint the signals from hundreds of individual neurons in a single recording. "Our goal is to better understand brain function by monitoring the dynamics within densely interconnected, three-dimensional networks of neurons," says Vaziri, head of the Laboratory of Neurotechnology and Biophysics. For this research, Vaziri and his colleagues engineered the animals' neurons to fluoresce; the stronger the signal, the brighter the cells shine. To capture this activity, they used a technique known as light field microscopy, in which an array of lenses generates views from a variety of perspectives.

A team of researchers from the Brain Research Institute of the University of Zurich and the Swiss Federal Institute of Technology (ETH) have developed a fully automated brain registration method that could be used to segment brain regions of interest in mice. Neuroscientists are always seeking out new methods of exploring the structure and function of different brain regions, which are initially applied on animals but could eventually lead to important discoveries about the organization of the human brain. "My lab aims to reveal how the mammalian brain develops its abilities to process and react to sensory stimuli," Theofanis Karayannis, one of the researchers who carried out the study told Tech Xplore. "Most of the work we do is on the experimental side, utilizing the mouse as a model system and techniques that range from molecular-genetic to functional and anatomical." This study is part of a larger project, which also includes "Exploring Brain-wide Development of Inhibition through Deep Learning," a study in which Karayannis and his colleagues use deep learning algorithms to comprehensively track the so-called inhibitory neurons over time in order to gauge the development of capabilities of the brain at specific points in time.