Besides a number of benefits, there are some technical problems with relay protection of distributed generators. It turned out to be one of the most problematical technical issues since its malfunction could cause serious risk for people and components. Much more small distributed generation units are nowadays connected to power systems than in the past. Protection requirements should relate to the value of the equipment protected. As such, protection requirements for large units differ from those for smaller units.

New protection system on Ford cars to save pedestrians

From seat belts and airbags to anti-lock brakes, modern cars come packed with a bewildering array of safety features designed to keep motorists and their passengers safe in a crash. But it seems vehicles of the future could also help to protect pedestrians from harm too. Ford, the car manufacturing giant, has revealed details of technology it is developing to reduce and even prevent injuries suffered by pedestrians should they be hit by a car. Ford engineers at its headquarters in Detroit have revealed the company will be including a new'pedestrian detection system' in its 2018 Ford Mustang (pictured) The firm plan to incorporate an inflatable bumper that bursts outwards to cushion the impact of the vehicle against the pedestrian's legs and airbags that pop out from the bonnet. A'pop up' mechanism for car bonnets lifts it up on springs to help absorb some of the force as pedestrians are thrown onto it in a collision. 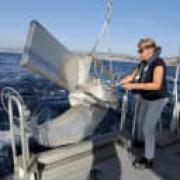 TAIPEI – Excessive speed was the main cause of the derailment of a train in Taiwan that killed 18 people and injured scores of others, a district court said Tuesday. The train entered a curve in eastern Taiwan on Sunday afternoon at 140 kph (87 mph), almost twice the speed limit for that section of track, the Yilan County district court said in a statement. The train's driver has been placed under investigation on suspicion of negligence leading to death. The driver, Yu Cheng-chung, had disabled the automatic train protection system after sensing "abnormal movements" in acceleration, the court statement said. The system would have allowed him to brake, and without it the driver was left to control the train by hand, it said.

This course teaches the student advanced methods or steps that can be used to protect one's computer against malicious intrusion, either in the form of a hacking attempt or in the form of attacks by viruses. Once a student completes this course, he or she will have a much clearer understanding as to how intrusion attack attempts occur and how one can protect oneself against them.

Montana lawmakers heard several bills seeking to make changes to the state's child protection system, from reducing turnover of caseworkers to setting higher standards for removing children from their homes.