Putin stressed that Russia would "continue to render every assistance to Syria in the protection of state sovereignty, unity and territorial integrity, in the promotion of a political settlement process, as well as in efforts to restore the national economy," the Kremlin said. 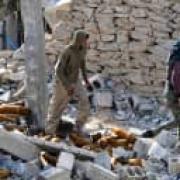 JERUSALEM - President Donald Trump abruptly declared Thursday the U.S. will recognize Israel's sovereignty over the disputed Golan Heights, a major shift in American policy that gives Israeli Prime Minister Benjamin Netanyahu a political boost a month before what is expected to be a close election. The administration has been considering recognizing Israel's sovereignty over the strategic highlands, which Israel captured from Syria in 1967, for some time and Netanyahu had pressed the matter with visiting Secretary of State Mike Pompeo just a day earlier. U.S. and Israeli officials said Wednesday they had not expected a decision until next week, when Netanyahu is to visit the U.S. But in a tweet that appeared to catch many by surprise, Trump said the time had come for the United States to take the step, which Netanyahu warmly welcomed as a "miracle" on the Jewish holiday of Purim. "After 52 years it is time for the United States to fully recognize Israel's Sovereignty over the Golan Heights, which is of critical strategic and security importance to the State of Israel and Regional Stability!"

Brexit: Gibraltar in talks with Scotland to stay in EU

Gibraltar is in talks with Scotland about a plan to keep parts of the UK in the EU, BBC Newsnight has learned. Fabian Picardo, the territory's chief minister, told the BBC he was speaking to Scotland's First Minister, Nicola Sturgeon, about various options. One possibility under discussion is for Gibraltar and Scotland, which both voted to remain in the EU, to maintain the UK's membership of the bloc. Ms Sturgeon confirmed to the BBC that talks are under way with Gibraltar. Northern Ireland could also potentially be included in the discussions.

Britain's May to Set Out Plans to Reclaim Legislative Sovereignty

Some companies have expressed fears that an expected two years of talks after the triggering of Article 50 could easily get bogged down by disputes and that the country will crash out of the EU in a so-called hard Brexit with little in place to ensure to ensure there is no disruption to markets and trade.

"The sovereignty of Gibraltar is unchanged and is not going to change, and cannot conceivably change without the express support and consent of the people of Gibraltar and the United Kingdom, and that is not is going to change," Johnson said on arrival at a meeting of EU foreign ministers in Luxembourg.