Investment into the digital health market topped 4.5 billion in 2015, and we are seeing an acceleration of investment in 2016. According to StartUp Health, investment into the digital health market for the first half of 2016 reached 3.9 billion. Early-stage innovation made up more than 65% of deals, with the majority of investment capital it going into Series A rounds. As of July, patient and consumer products, which include wearables, are leading with over 960 million invested in this sector, followed by wellness at 854 million, personalized health at 524 million, big data/analytics at 406 million and workflow at 328 million. Digital health research and population health are at the bottom of the start-up health company's list, with 65 million and 55 million, respectively. It's no surprise that we are seeing digital health M&A activity coming from tech giants such as Google, Apple and IBM. 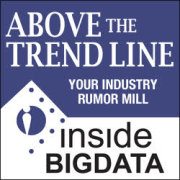 Above the Trend Line: your industry rumor central is a recurring feature of insideBIGDATA. In this column, we present a variety of short time-critical news items grouped by category such as people movements, funding news, financial results, industry alignments, rumors and general scuttlebutt floating around the big data, data science and machine learning industries including behind-the-scenes anecdotes and curious buzz. Our intent is to provide you a one-stop source of late-breaking news to help you keep abreast of this fast-paced ecosystem. We're working hard on your behalf with our extensive vendor network to give you all the latest happenings. Be sure to Tweet Above the Trend Line articles using the hashtag: #abovethetrendline.

ARM Holdings is preparing a $600mn takeover bid for data analytics specialist Treasure Data, reports Bloomberg. SoftBank-owned ARM, which is based in the United Kingdom and is an industry-leader in semiconductor and software design, is eyeing the acquisition to expand its footprint in the Internet of Things (IoT). IoT is at the forefront of ARM's long-term strategy - in June, it completed the acquisition of leading technology connectivity management provider Stream Technologies and by 2035 it hopes to operate a trillion connected devices around the world. ARM was sold to SoftBank in 2016 for a reported $32bn, a purchase funded by SoftBank's Vision Fund which delivers investment for startups in advanced technologies such as artificial intelligence, driverless cars, robotics and ride sharing, as well as IoT. Treasure Data operates cloud services tailored to Big Data collection, storage and analysis and already works with a number of major IoT companies.

Here are this week's top stories in fraud and big data technology: Thanks to its huge network of users, Sprint has access to vast amounts of user data. Three years ago it established subsidiary Pinsight Media to investigate ways of capitalizing on that data. Since then it has gone from serving zero to six billion ad impressions per months, based on "authenticated first party data" which it alone has access to. The fact that plain passwords are no longer safe to protect our digital identities is no secret. For years, the use of two-factor authentication (2FA) and multi-factor authentication (MFA) as a means to ensure online account security and prevent fraud has been a hot topic of discussion.

WIRE)--Glooko, the leader in diabetes data management, today announced $35 million in new funding to accelerate growth, expand international presence, and deepen expertise in data analytics. This round was led by Georgian Partners, a Toronto-based investor focused on applied analytics and machine learning. Other new investors include Insulet Corporation and Mayo Clinic who join existing investors Canaan Partners, Social Capital, Medtronic and Samsung NEXT in the round. Glooko will use the funds to accelerate growth by expanding its sales, marketing and development teams. The company will also increase commercialization efforts in France, Germany, the U.K., Asia and the Middle East, and further development efforts in data analytics and artificial intelligence to provide personalized insights that drive meaningful behavior change.