Trump's MS-13 Fearmongering Is Working Perfectly With His Voters

In Donald Trump's telling, MS-13 poses a fundamental threat to America. Starting early in his presidency, his U.S. Department of Justice made the transnational gang one of its top priorities, and late last month, Trump claimed to have personally seen Immigration and Customs Enforcement agents "liberate towns" from the gang's grasp. In between, the president called MS-13 members "animals" and "thugs," claimed unaccompanied immigrant children were actually gang members in disguise, and tried to use those concerns as a way to explain away his administration's inhumane actions at the U.S. border, which took more than 2,000 kids away from their parents. A new poll suggests all that fearmongering has had its intended affect. According to a YouGov survey commissioned by the Huffington Post, 85 percent of Trump voters believe MS-13 is either a "very" or "somewhat" serious national threat (60 percent very serious), 53 percent believe the gang is also a local threat to their communities (20 percent very serious), and 51 percent worry at least "somewhat" that they or their family members will personally be a victim of the gang's violence (12 percent worry "a great deal").

The United Kingdom will boost its ability to handle threats posed by Russia and China in space as part of a foreign, security and defence policy review being conducted by the government, Defence Secretary Ben Wallace has said. "This week we have been reminded of the threat Russia poses to our national security with the provocative test of a weapon-like projectile from a satellite threatening the peaceful use of space," Wallace wrote in The Sunday Telegraph newspaper, adding that China also posed a threat. "China, too, is developing offensive space weapons and both nations are upgrading their capabilities. Such behaviour only underlines the importance of the review the government is currently conducting," he added. On Thursday, the UK said it was concerned about a Russian satellite test which involved the launch of a projectile with the "characteristics of a weapon".

British officials have raised the threat level regarding a possible attack on the mainland by Irish Republican dissidents. The government Wednesday raised the threat level from "moderate" to "substantial" meaning that a terrorist attack is viewed as a "strong possibility." Home Secretary Theresa May said security officials raised the level because of the "continuing threat from dissident Republican activity." Several dissident Republican groups in Northern Ireland remain opposed to the peace process supported by Sinn Fein, the major Catholic-backed party in Northern Ireland. The overall threat level to Britain remains at "severe" mostly because of the danger posed by Islamic State extremists and their allies in Britain.

Person Who Made Phone Threat to Oklahoma School Identified

The Oklahoma Department of Rehabilitation Services says the school in Sulphur, about 75 miles south of Oklahoma City, closed after receiving the threat on Aug. 16. Officials said at the time they believed the call was linked to threats against a transgender student who attends another school that was closed over safety concerns. 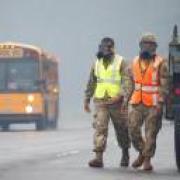 OSLO – A third of the world's protected areas for wildlife are suffering road-building, more farms and other man-made threats that are undermining goals to safeguard the diversity of life on Earth, scientists said Thursday. Almost 200 nations agreed in 2010 to set aside at least 17 percent of the world's land areas in parks and other sanctuaries by 2020 as a cornerstone of a plan to shield animals and plants from pollution, land clearances and climate change. But many protected areas fall short, according to a report in the journal Science led by researchers at the University of Queensland in Australia. The area is roughly equal to the size of India and Argentina combined. Mangroves, Mediterranean forests, some grasslands and savannas were among protected areas most at risk.