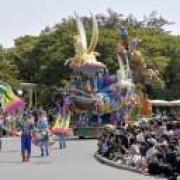 A U.S. military parachute fell from a transport aircraft in Tokyo on Tuesday afternoon, landing on a tennis court at a junior high school. There were no reports of injuries. The U.S. military apologized to the Japanese Defense Ministry over the incident, and the ministry called for measures to prevent a recurrence. The parachute fell on the junior high school in the city of Hamura after becoming detached due to trouble during a parachute drop training exercise at around 4:30 p.m., the Defense Ministry said. The exercise was conducted above the U.S. military's Yokota Air Base, which straddles Hamura and other cities, but the parachute was carried by the wind and fell outside the base, the ministry quoted the U.S. military as saying.

How to survive a parachute failure

Former army fitness instructor Emile Cilliers has been convicted of trying to murder his wife, Victoria, by tampering with her parachute. She survived a 4,000ft fall. But how can a human being do this? You pull the cord to open your parachute. Your body's still hurtling towards Earth with only drag - air friction - to slow it down.

A skydiver died after her parachute failed to deploy properly at the Skydive Lodi Parachute Center, investigators said. The Skydive Lodi Parachute Center in Acampo, Calif., has reported a skydiver died Sunday afternoon. The San Joaquin County Sheriff's Office says their coroner division was responding to the Lodi Airport following an incident connected to the Parachute Center. The Federal Aviation Administration determined the skydiver was killed when her parachute failed to properly deploy. At the time she was using her own parachuting equipment.

Recovery effort suspended for airman lost in Gulf of Mexico

The Air Force has identifies the missing airman who fell into Gulf of Mexico from a C-130 aircraft. He is presumed dead as recovery efforts continue. The search for an Air Force special tactics combat controller who fell into the Gulf of Mexico after falling out of a plane earlier this month has been suspended, military officials said over the weekend. The Air Force, along with other military branches, has conducted round-the-clock searches in an effort to recover the remains of Staff Sgt. Cole Condiff, 29, fell out of a plane earlier this month into the Gulf of Mexico.

Gov. Burgum to Skydive With Members of Navy Parachute Team

Burgum says he will skydive with members of the U.S. Navy Leap Frogs Parachute Team on Saturday morning. Once on the ground, Burgum is scheduled to deliver opening remarks to attendees of the event at the Hector International Airport.