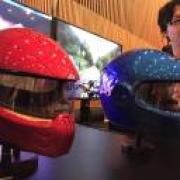 SAN FRANCISCO – Apple said Tuesday that its profit had jumped more than 30 percent to $11.5 billion in the recently ended quarter, besting market expectations despite selling fewer iPhones than analysts projected. The news boosted shares in the tech giant in after-hours trading, putting it ever closer to a history-making, trillion-dollar market value, even as China's Huawei knocked Apple off second spot in a tightening global smartphone market.

Apple beats expectations as it reveals it sold 52.2 MILLION iPhones

Apple Inc. shares jumped 3.5 percent in pre-market trading Wednesday after the company projected sales that suggest consumers are still snapping up the company's high-end iPhones even as updated models are on the horizon. The Cupertino, California-based technology giant said on Tuesday it expects fiscal fourth-quarter revenue between $60 billion and $62 billion. Analysts were looking for $59.4 billion, according to data compiled by Bloomberg. Fiscal third-quarter results also beat Wall Street expectations, at one point sending the shares to $198 in extended trading, a record price if the increase holds through Wednesday. Apple's stock gained 12 percent this year though Tuesday's close -- before the results were announced -- putting the iPhone maker on a path to become the first U.S.-based company with a market value of $1 trillion.

Tech giant Apple has become the first private-sector company in history to hit a stock market valuation of one trillion dollars. The reaching of the milestone on Thursday crowned a decade-long rise fuelled by its ubiquitous iPhone that transformed the US company from a niche player in personal computers into a global powerhouse spanning entertainment and communications. Its stock jumped 2.8 percent to as high as $207.05, Apple's revenue in the fiscal third quarter soared 17 percent to $53.3bn from the same period a year earlier on the back of sales of pricier iPhones, online services and wearable devices. Since starting out in a family garage in California's Silicon Valley more than 40 years ago, Apple weathered boardroom drama, market missteps, and even a close call with bankruptcy on its path to the milestone, thanks to products that radically transformed lifestyles and the way we communicate with each other.

Apple has reported better-than-expected earnings and offered a rosy forecast for the holiday shopping season, allaying investor concerns about production delays on the new iPhone X and demonstrating remarkable strength across its growing line of products and services. The stellar earnings report came just as the iPhone X went on sale on Friday morning in Australia. Long lines were forming at Apple stores around the world, recalling the consumer frenzy that greeted early versions of the iPhone, but had faded with more recent launches. With supplies potentially tight, some Australian purchasers were already planning to sell their phones for as much as A$3,000, nearly double the A$1,579 selling price. Apple shares rose 4 per cent in after-hours trading to hit an all-time high, with analysts lavishing praise on Apple CEO Tim Cook and speculating on when Apple might become the first public company worth a trillion dollars.