Of course you do! You're reading IEEE Spectrum, so you almost certainly love robots. Now let us ask you this: What's your favorite robot? We bet some of you said R2-D2. These are all cool robots. But here's the problem: Those are not real robots. 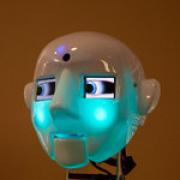 On a recent morning Natanel Dukan walked into the Paris offices of the French robot maker Aldebaran and noticed one of the company's humanoid NAO robots sitting on a chair. Mr. Dukan, an electrical engineer, could not resist. In response the NAO tilted its head, touched his cheek and let out an audible smack. It is certainly a very French application for a robot, but the intimate gesture by the $16,000, two-foot robot, now being used in academic research labs and robotic soccer leagues, also reflects a significant shift. Until recently, most robots were carefully separated from humans.

Why AI Won't Overtake the World, but Is Worth Watching

You probably encounter it on a daily basis. Your actions help it grow. Yet you rarely give it a second thought. Artificial intelligence is in your pocket. We comb through search results and social feeds on our screens. We rely on our GPS systems to suggest the best route. We make buying decisions based on recommendations by savvy algorithms that track our browsing habits. We make inquiries of our personal assistants dutifully standing by in our kitchens and dens, or at the ready on our phones. Whether we consider it helpful or intrusive, empowering or manipulative, the technology is at our disposal. How we use it, is our choice. RIA sought out notable voices in AI to help us better understand the sometimes elusive nature of artificial intelligence. These are researchers and entrepreneurs with decades of experience working in the AI and robotics fields.

A Long Goodbye to Baxter, a Gentle Giant Among Robots

For a serious research robot, Baxter is a charmer. Its face is a flat screen that telegraphs "feelings" like embarrassment (rosy cheeks, upturned eyebrows). If you're so inclined, you can sit in front of it and make it read your mind to fix its mistakes. Or you can point to objects for it to pick up. If it gets confused, it can actually ask you for clarification, a seemingly simple interaction that's in fact a big deal for the budding field of human-robot communication.

Happy International World Book and Copyright Day! It's a celebration of authors, illustrators, books and reading, held annually on 23 April--a symbolic date coinciding with the anniversary of the deaths of William Shakespeare and Miguel de Cervantes. By celebrating, UNESCO seeks to promote reading, publishing and the protection of copyright, and will be hosting a series and events and conferences over the coming days. Here at Robohub, we're celebrating by sharing our list of 20 robot related books (in no particular order) aimed at engaging kids and/or teens with everything robotics. Ranging from funny fictional narratives to DIY drone building and coding, these books are sure to stoke the imaginations of budding innovators and creators. If you can think of any other books that deserve inclusion, we'd love to hear about them!