Royal Caribbean International is introducing a new tool that will transform guest photos into musical videos. Designed and built in conjunction with the Berklee College of Music, the new SoundSeeker tool was a year in development. It uses artificial intelligence ("AI") to create an original, sharable soundtrack tailored to guest photos. Agents Both Hopeful and Reserved on RCCL's Silversea... Cruise Line & Cruise Ship "SoundSeeker is the latest proof point of Royal Caribbean innovation and how we focus it on delivering unexpected, memorable experiences; whether that is the SkyPad, which uniquely combines bungee jumping with virtual reality or live streaming your favorite shows from the middle of the ocean using VOOM, the fastest internet at sea," said Jim Berra, chief marketing officer, Royal Caribbean International. "People of all ages crave new ways to share their best experiences on social media.

Since the pandemic migrated pretty much all movie-viewing online, several streaming sites have responded with new levels of ambitious programming. Among the most conspicuous is the Criterion Channel (I've written recently about some of their most welcome offerings, including "Compensation" and "When Tomorrow Comes"), but the site MUBI (which is available as an Amazon channel) is doing remarkable work a bit more under the radar. This week, for instance, it brought out "About Some Meaningless Events," a nearly lost masterwork of Moroccan political cinema which for decades had been entirely unavailable. MUBI's selections cull some of the best in recently released movies as well as hard-to-find classics, both American and international, including some unduly obscure masterpieces that I've been enthusing about for decades to anyone within earshot. Here are ten of them.

Rhythm game 'A Musical Story' comes to consoles, iOS and PC this October

French indie developer Glee-Cheese Studio will release its first game, A Musical Story, this October. In it, you play as Gabriel, a Jimi Hendrix-like character with a seriously awesome afro. At the start of the game, Gabriel finds himself on a hospital bed, unable to remember how he got there. Part rhythm game, you'll need to play music to unlock his memories. True to A Musical Story's '70s influences, many of the tracks sound like they could have been penned by Led Zeppelin, Pink Floyd and of course Jimi Hendrix himself.

Two brothers, one Christian, one Muslim, try to bridge their worlds in 'Bars and Measures' 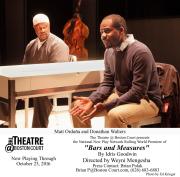 Race, religion and terrorism: In the prescient 2015 drama "Bars and Measures" at the Theatre @ Boston Court in Pasadena, playwright Idris Goodwin hits the trifecta of incendiary headline topics, overlaid with rich musical inflections. In the captivating opener, music takes center stage as two men seated across a table launch into an intricate skat and bebop routine. Through the efficiently crafted dialogue that follows, we learn they are brothers who hold opposing faiths. And the reason this performance is a cappella: Inmates are not permitted musical instruments. Loosely based on a 2005 domestic anti-terrorism case, the play has classically-trained pianist Eric (Donathan Walters), a Christian, visiting his imprisoned brother Bilal (Matt Orduña), a stellar jazz upright bassist and converted Muslim who's been arrested in a sting operation.

A Walk Down Memory Lane with AI Accenture

Today's tech-enabled marketplace has brought a fever pitch of innovation, creating ease in many ways, but also changing human interactions foundationally. We're more digitally connected than ever but opportunity for meaningful engagement sometimes appears to have been lost in the digital fray. As we settle into this new norm, aspiring innovators have the privileged responsibility of examining how change has impacted human lives around us and the opportunity to improve our day-to-day with technology instead of being ruled by it. A case study in potential for disconnect, Sweden has been recently deemed one of the loneliest cities on the planet, with an estimated 250,000 residents living alone. Swedish heating, cooling and energy company, Stockholm Exergi wanted to extend their commitment to "making Stockholm a warmer place" by influencing social good and inspiring positive change for its citizens.