In November, Xinhua and Sogou unveiled the first AI news anchors of any gender, a pair of male AIs trained to deliver the news in either English or Chinese. The same day they unveiled Xin, Xinhua and Sogou announced that they'd given these AI anchors the ability to stand and talk simultaneously, and they'll show off that new ability while covering the Two Sessions alongside their female counterpart. When Xinhua debuted their first AI anchors in November, the news agency claimed that each anchor could "work 24 hours a day on its official website and various social media platforms, reducing news production costs and improving efficiency." Since then, the anchors have delivered 3,400 news reports while logging 10,000 minutes of screen time, according to Tencent News. 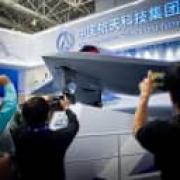 SHANGHAI – China's state-controlled news broadcasters have long been considered somewhat robotic in their daily recitation of pro-government propaganda and a pair of new presenters will do little to dispel that view. Calling it a "world first," the Xinhua News Agency this past week debuted a pair of virtual news anchors amid a state-directed embrace of advanced technologies such as artificial intelligence. Based on the appearances of two flesh-and-blood Chinese news presenters, the computerized avatars read out text that is fed into their system, their mouths moving in tandem with the reports. Xinhua said the "AI Synthetic Anchors," one for Chinese and one for English news, were developed along with Sogou Inc., a Beijing-based creator of search engines and voice-recognition technology. China last year unveiled plans to become a world leader in AI and other high-tech fields, though it has since toned down the rhetoric amid a trade war with the United States, which has included accusations by President Donald Trump that China steals U.S. technologies.

Ditch your boring weights for this resistance band training system

TL;DR: Stay fit even while at home with the HYFIT Smart Portable Training System for $249.99, a 16% savings as of Aug 3. Every fitness startup's new product launch is just the coolest thing, right? You have fitness gear equipment fatigue. But take a breath, because this one comes at a great price. Hyfit Gear One includes resistance bands that you can wear on your body -- meaning, you don't have to deal with finding a post, door frame, chair, or otherwise sturdy object to attach your bands to. With Hyfit Gear One, you can create your own resistance with your body, completely eliminating the need for other objects.

Watch this creepy AI anchor talk like a real person

China's state-run media Xinhua and Beijing-based search engine Sogou debuted two "AI composite anchors" -- one each for English and Chinese viewers -- at the World Internet Conference in Wuzhen Wednesday. The AI are "cloned" from real-life anchors, according to Xinhua's report, sporting the same faces and voices. The program extracts and combines the features of human anchors from videos of their reporting, using their speech, lip movements and facial expressions. But there's one difference: While human anchors work eight hours everyday, their AI clones can report news tirelessly 24/7. "AI anchors have officially become members of Xinhua's reporting team," the publication said in its report, adding, "Together with other anchors, they will bring you authoritative, timely and accurate news information in Chinese and English."