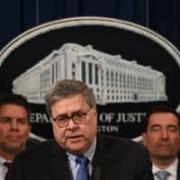 Iran's Revolutionary Guard claims the vessel was caught trying to smuggle Iranian oil to foreign ships; Trey Yingst reports. Iran on Friday denied President Trump's claim that a U.S. warship destroyed an Iranian drone near the Persian Gulf after it threatened the ship -- an incident that further escalated tensions between the countries. Trump said Thursday that the USS Boxer – which is among several U.S. Navy ships in the area – took defensive action after an Iranian drone came within 1,000 yards of the warship and ignored multiple calls to stand down. Trump blamed Iran for a "provocative and hostile" action and said the U.S. responded in self-defense. But Iran's foreign minister, Mohammad Javad Zarif, told reporters as he arrived for a meeting at the United Nations that "we have no information about losing a drone today."

An explosive-laden drone, sent by the Islamic State group (ISIS), was intercepted and shot by Kurdish forces in Iraq early this month, according to reports Tuesday. However, the drone blew up and killed two Kurdish fighters and injured two French soldiers. The incident reportedly happened on Oct. 2 in Erbil, which serves as the capital of Iraqi Kurdistan, where French troops have been fighting along with Kurdish fighters against ISIS, according to the New York Times and French newspaper Le Monde. Neither Iraqi officials nor French authorities have confirmed the incident. About 500 French military personnel have been deployed in Iraq to fight ISIS.