Driving Artificial Intelligence and Robotics on the Factory Floor

"Not in two years or three years," Brooks asserted during an IndustryWeek interview that year. As well, he's made possible the next generation of automation in factory operations and, with the low-cost of the robots, made practical the use of robots in small and midsize manufacturing plants. They think that Baxter and Sawyer are critical combinations of technologies uniquely suited to help rejuvenate the U.S. manufacturing sector. For Brooks, however, the jury's still out as to whether the robots will help spur a U.S. manufacturing revival. I hope so," he says, when asked. 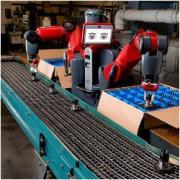 MIT professor emeritus Rodney Brooks gained fame in the 1990s for co-founding iRobot, an MIT spinoff that brought the world the Roomba and other innovative, helpful robots. He's since moved on to robots that are bigger, but no less revolutionary. Brooks' newest startup, Rethink Robotics, headquartered in Boston, is producing robots that can work safely in factories alongside humans and demonstrate "common sense," adapting to their tasks and environment. Rethink's first commercial model, Baxter, released in January, is a human-sized, two-armed robot that can be programmed to learn repetitive production tasks: material handling, testing and sorting, light assembly, and packing and unpacking. Any worker, tech-savvy or not, can program Baxter by moving the robot's arms -- demonstrating the desired tasks and locations -- and pressing buttons on a control panel.

Rethink Robotics is taking the wraps off a massive project that the company has been working on for two years. "It's been a big part of our development that the world hasn't seen," says Rethink founder and CTO Rodney Brooks. "I've been so excited about this because I know what it can do." A little over a year ago, Rethink started shipping Sawyer, a collaborative robot designed to be faster, stronger, and more precise than the company's first cobot, Baxter, which didn't "sell like hotcakes," as Brooks had expected. But developing a brand-new robot was just part of Rethink's post-Baxter plans: Another goal was completely rebuilding its software platform, called Intera, which is responsible for controlling all of Sawyer's functions as well as allowing users to program the robot.

A humanoid robot designed to work safely alongside people on factory production lines has been unveiled in the US. Priced at $22,000 (£13,500), Baxter will go on sale in October. Its makers, Rethink Robotics, say it can apply common sense, adapt to its environment and be trained in less than 30 minutes to complete specific tasks, by workers without robotic expertise. Currently factory robots tend to work separately to humans, often in cages. Rodney Brooks, Rethink Robotics founder and former director of the MIT Computer and Science and Artificial Intelligence Lab, said he hoped Baxter represented a "new concept in manufacturing".

A Robot With a Delicate Touch

Here in a brick factory that was once one of the first electrified manufacturing sites in New England, Rodney A. Brooks, the legendary roboticist who is Rethink's founder, proves its safety by placing his head in the path of Baxter's arm while it moves objects on an assembly line. The arm senses his head and abruptly stops moving with a soft clunk. Dr. Brooks, unfazed, points out that the arm is what roboticists call "compliant": intended to sense unexpected obstacles and adjust itself accordingly. The $22,000 robot that Rethink will begin selling in October is the clearest evidence yet that robotics is more than a laboratory curiosity or a tool only for large companies with vast amounts of capital. The company is betting it can broaden the market for robots by selling an inexpensive machine that can collaborate with human workers, the way the computer industry took off in the 1980s when the prices of PCs fell sharply and people without programming experience could start using them right out of the box.