'Moral' Robots: the Future of War or Dystopian Fiction?

The dawn of the 21st century has been called the decade of the drone. Unmanned aerial vehicles, remotely operated by pilots in the United States, rain Hellfire missiles on suspected insurgents in South Asia and the Middle East. Now a small group of scholars is grappling with what some believe could be the next generation of weaponry: lethal autonomous robots. At the center of the debate is Ronald C. Arkin, a Georgia Tech professor who has hypothesized lethal weapons systems that are ethically superior to human soldiers on the battlefield. A professor of robotics and ethics, he has devised algorithms for an "ethical governor" that he says could one day guide an aerial drone or ground robot to either shoot or hold its fire in accordance with internationally agreed-upon rules of war. But some scholars have dismissed Mr. Arkin's ethical governor as "vaporware," arguing that current technology is nowhere near the level of complexity that would be needed for a military robotic system to make life-and-death ethical judgments.

A new short film from the Campaign Against Killer Robots warns of a future where weaponised flying drones target and assassinate certain members of the public, using facial recognition technology to identify them. 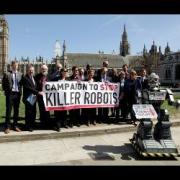 The history of battle knows no bounds, with weapons of destruction evolving from prehistoric clubs, axes, and spears to bombs, drones, missiles, landmines, and systems used in biological and nuclear warfare. More recently, lethal autonomous weapon systems (LAWS) powered by artificial intelligence (AI) have begun to surface, raising ethical issues about the use of AI and causing disagreement on whether such weapons should be banned in line with international humanitarian laws under the Geneva Convention. Much of the disagreement around LAWS is based on where the line should be drawn between weapons with limited human control and autonomous weapons, and differences of opinion on whether more or less people will lose their lives as a result of the implementation of LAWS. There are also contrary views on whether autonomous weapons are already in play on the battlefield. Ronald Arkin, Regents' Professor and Director of the Mobile Robot Laboratory in the College of Computing at Georgia Institute of Technology, says limited autonomy is already present in weapon systems such as the U.S. Navy's Phalanx Close-In Weapons System, which is designed to identify and fire at incoming missiles or threatening aircraft, and Israel's Harpy system, a fire-and-forget weapon designed to detect, attack, and destroy radar emitters.

Do We Want Robot Warriors to Decide Who Lives or Dies?

Czech writer Karel?apek's 1920 play R.U.R. (Rossum's Universal Robots), which famously introduced the word robot to the world, begins with synthetic humans--the robots from the title--toiling in factories to produce low-cost goods. It ends with those same robots killing off the human race. Thus was born an enduring plot line in science fiction: robots spiraling out of control and turning into unstoppable killing machines. Twentieth-century literature and film would go on to bring us many more examples of robots wreaking havoc on the world, with Hollywood notably turning the theme into blockbuster franchises like The Matrix, Transformers, and The Terminator. Lately, fears of fiction turning to fact have been stoked by a confluence of developments, including important advances in artificial intelligence and robotics, along with the widespread use of combat drones and ground robots in Iraq and Afghanistan. The world's most powerful militaries are now developing ever more intelligent weapons, with varying degrees of autonomy and lethality.

This isn't a sci-fi film: Autonomous Weapons Systems could be a reality soon - Firstpost

The threat from such machines is real enough for 100 states to come together and debate the matter of their ban for three consecutive years now. The use of autonomous machines could potentially change the vocabulary of warfare, just like gun powder and nuclear arsenal upon their entry into the battlefield. In April 2013, NGOs associated with successful efforts to ban landmines and cluster munitions got together in London and issued a call to governments urging the negotiation of a treaty preventing the development, deployment and use of what are known as'Killer Robots' in popular parlance. In July 2015, some of the world's leading Artificial Intelligence (AI) scientists including Apple co-founder Steven Wozniak, Skype co-founder Jaan Tallin and Professor Stephen Hawking signed a letter with nearly 21,000 signatures asking for an outright ban on these autonomous weapons systems (AWS). "Autonomous weapons will become the Kalashnikovs of tomorrow," states the letter.