U.S. Weaponizes Its Criminal Courts in Fight Against China and Huawei

The Trump administration wants to use indictments, along with export controls and other policy tools, as part of an arsenal to counter Chinese theft of trade and technology secrets, which U.S. officials increasingly view as part of national security, The Wall Street Journal has reported. That has meant a more aggressive effort to convert corporate squabbles into criminal charges. The federal investigation, first reported by The Wall Street Journal, into whether Huawei stole trade secrets from U.S. business partners arose from civil lawsuits, including one in which the Shenzhen-based company was accused of misappropriating robotic technology from wireless-network operator T-Mobile US Inc. In November, the U.S. said it indicted two companies in China and Taiwan on charges of stealing semiconductor-design secrets from Idaho-based chip maker Micron Technology Inc., based almost entirely on litigation that Micron had filed in California courts a year earlier. In both cases, the entry of federal prosecutors ratcheted up global attention and the stakes in what had until then been less noticed civil filings. 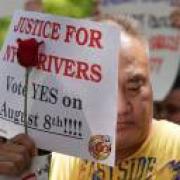 SAN FRANCISCO – Tesla CEO Elon Musk is seeking relief from the pressures of running a publicly held company with a $72 billion buyout of the electric car maker, but he may be acquiring new headaches with his peculiar handling of the proposed deal. Almost everything about the deal is outlandish, from Musk's out-of-the-blue disclosure in a nine-word tweet to the assertion that he has lined up adequate financing to a buy a company that seems to burn through cash faster than it produces cars. If Musk can pull it off, he will have burnished his reputation as an eccentric visionary who has been compared to Tony Stark, the billionaire playboy depicted by actor Robert Downey Jr. in the "Iron Man" movies. But if the buyout flops, Musk and Tesla will likely face class-action lawsuits from shareholders alleging they were duped, and potential legal trouble from the Securities and Exchange Commission, too. The SEC already has opened an inquiry into the wording and method of Musk's disclosure about the deal, according to a Wednesday report in The Wall Street Journal, which cited unidentified people familiar with the matter.

The US government is pushing ahead with a demand that Apple unlock an iPhone belonging to a drug dealer in Brooklyn, New York. In a letter filed with the court on Friday, prosecutors said the case is "not moot," despite successfully breaking into an iPhone earlier this year used by one of the shooters in the San Bernardino, California terrorist attack. Obtaining a company's source code makes it radically easier to find security flaws and vulnerabilities for surveillance and intelligence-gathering operations. US Attorney Robert Capers said that the government "continues to require Apple's assistance in accessing the data" on the phone. Prosecutors said in the court filing that it will push for the appeal because Apple had previously helped the government gain access to dozens of other cases, prior to the release of iOS 8, which shut out law enforcement altogether.

Perhaps the biggest news to come out of the wireless industry since the smartphone is the proposed T-Mobile (NASDAQ:TMUS) and Sprint (NYSE:S) merger. According to The Wall Street Journal, T-Mobile is paying $26 billion for the Kansas-based provider if shareholders and regulators allow it. This article originally appeared in the Motley Fool. While it's too early to determine whether the biggest beneficiary of the acquisition will be the new combined company or legacy carriers Verizon or AT&T (NYSE:T), the loser is clear: It's you, provided you're paying for one or more of the 420 million wireless-powered smartphones and/or connected device connections. Although wireless telephony is already an oligopoly, with the top four carriers taking more than 95% market share, in many ways the industry behaves like anything but.

Amid a surge in San Bernardino crime, one family looks to get out

One San Bernardino family must decide whether it is too dangerous to live in their neighborhood amid a surge in crime. The area has long struggled with violence, but 2016 has been one of its bloodiest years ever. In this city of about 216,000 residents, 60 people have been killed -- already more than in any year since 1995, when 67 people were slain. Steven Mnuchin, a wealthy Wall Street executive and Hollywood movie producer, is Donald Trump's choice to be the next Treasury secretary. Mnuchin has served as chairman of a Pasadena-based bank that has been criticized for a large number of foreclosures and hit by allegations of discrimination against minorities.