Three Texas landowners and an environmental group have filed the first lawsuit challenging President Donald Trump's national emergency declaration aimed at freeing up billions of dollars to build a wall along the US border with Mexico, the consumer advocacy group Public Citizen (PC) has said. The lawsuit, brought in federal court in the District of Columbia on Friday, claims the south Texas landowners were told by the US government that it would seek to build a border wall on their properties if money for the project were available in 2019, according to a press release from PC. "Words have meaning," Allison Zieve, Public Citizen's counsel for the plaintiffs, said in the release. "The facts make clear that the premise of the president's declaration – that the absence of a wall in the areas where construction is planned is an'emergency' – is legally untenable and an impermissible basis for seeking to obligate funds that Congress has refused to appropriate for a border wall." Three of the plaintiffs on the lawsuit are private citizens in Texas's Starr county, which was home to roughly 65,000 people in 2017. The fourth plaintiff is the Frontera Audobon Society, a 15-acre (six hectares) nonprofit that acts as a "haven for birds, butterflies and other wildlife". 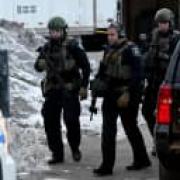 WASHINGTON - Defiant in the wake of a stinging budget defeat, President Donald Trump on Friday declared a national emergency at the U.S.-Mexico border, moving to secure more money for his long-promised wall by exercising a broad interpretation of his presidential powers that is certain to draw stiff legal challenges. In his emergency proclamation, Trump painted a dark picture of the border as "a major entry point for criminals, gang members, and illicit narcotics" and one that threatens "core national security interests." Overall, though, illegal border crossings are down from a high of 1.6 million in 2000. His declaration instantly transformed a contentious policy fight into a foundational dispute over the separation of powers enshrined in the Constitution, spurring talk of a congressional vote to block Trump and ensuring that the president and Democrats will continue fighting over the border wall in Congress, the courts and on the campaign trail. It triggered outrage from Democrats, unease among some Republicans and flew in the face of years of GOP complaints that President Barack Obama had over-reached in his use of executive authority. 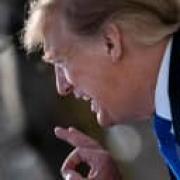 NEW YORK/WASHINGTON/WILMINGTON, DELAWARE - Democratic lawmakers, states and others mulling legal challenges to U.S. President Donald Trump's national emergency declaration to obtain funds to build a U.S.-Mexico border wall face an uphill and probably losing battle in a showdown likely to be decided by the conservative-majority Supreme Court, legal experts said. After being rebuffed by Congress in his request for $5.7 billion to help build the wall that was a signature 2016 campaign promise, Trump on Friday invoked emergency powers given to the president under a 1976 law. The move, according to the White House, enables Trump to bypass lawmakers and redirect money already appropriated by Congress for other purposes and use it for wall construction. Peter Shane, a professor at Ohio State University's Moritz College of Law, said challenges to the emergency declaration could end up as a replay of the legal battle against Trump's travel ban targeting people from several Muslim-majority nations. The Supreme Court last year upheld the travel ban after lower courts had ruled against Trump, with the justices giving the president deference on immigration and national security issues.

Is Declaring a National Emergency to Build an Unnecessary Wall an Impeachable Offense?

A version of this piece first appeared on the blog Impeachable Offenses. The looming question in the ongoing government shutdown is whether President Donald Trump will, as he repeatedly threatens, declare a "national emergency" to get funding for his border wall if Congress will not pass budgetary authorization for the edifice. Multiple excellent analyses of a president's legal authority to declare such emergencies have appeared. The upshot of all of them is that the administration could make superficially plausible arguments for such authority but that all such arguments would trigger compelling legal challenges. Moreover, a use of "emergency" powers to circumvent congressional unwillingness to fund a long-wished-for presidential pet project would be both unprecedented and a serious challenge to constitutional separation of powers norms.

Yoo and Peterson: Trump can move funds for border wall -- and the Supreme Court will back him

President Trump takes a question from Fox News' John Roberts on his decision to divert military funds to the southern border. The Constitution does not prevent President Donald Trump from moving federal funds to build a wall on the southern border -- and the Supreme Court will not rule otherwise. Democratic leaders greeted last week's news that the Pentagon had carried out Trump's transfer of $3.6 billion for the border wall as if the constitutional heavens had fallen. "The president is negating the Congress' most fundamental principles -- the Constitution's most fundamental principle -- the separation of powers," Speaker Nancy Pelosi said on Wednesday, "by assaulting the Constitution's power, our power of the purse, and he's undermining the oath of office he takes to protect and defend the Constitution and the American people." Even conservative commentators have echoed the claim that the president is violating the Constitution by moving funds for the wall without congressional permission.