Apple was hit with a lawsuit earlier this year that claims the company purposefully broke FaceTime on iOS 6 in order to push people to upgrade to iOS 7. And as of late last week, Apple failed to get the suit dismissed as District Judge Lucy Koh ruled that iPhone 4 and 4S users can pursue claims against Apple. The whole situation is a result of Apple wanting to reduce the cost of using third-party servers to manage FaceTime calls. Doing so was costing the company millions of dollars per month in fees, so with iOS 7, Apple changed the way FaceTime functioned so that the third-party servers weren't used as often. However, users of iPhone 4s and 4Ss were still using iOS 6 so, allegedly, Apple let a security certificate lapse in order to break FaceTime for iOS 6 and force customers to upgrade their operating systems. 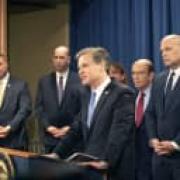 SAN FRANCISCO - A newly discovered Facetime bug lets people hear and even see those they are reaching out to on iPhones using the video calling software, sparking privacy fears. The bug, initially outlined by Apple product and review website 9to5Mac.com, was reported by several media outlets. A video posted at Twitter account @BmManski showing how simple it is to take advantage of the flaw, and listen in on an iPhone being called using Facetime, logged nearly 2 million views and was shared 14,000 times by late evening in California. Some Twitter users offered advice to disable the Facetime application until a fix was in place. An Apple support page listed Group Facetime calling as "temporarily unavailable" as of 7:16 p.m. PST due to an ongoing "issue" that was not specified.

Apple is being sued by a Houston lawyer over the just-revealed FaceTime bug that prompted the iPhone maker to take Group FaceTime offline yesterday. The unusual bug in iOS 12.1 allowed anyone to use the Group FaceTime feature on the iPhone to listen to or view a video of a recipient, even without the recipient answering the FaceTime call. Larry Williams II, a Houston-based lawyer, has now filed a lawsuit against Apple claiming damages over the iOS bug, Bloomberg reports. He claims someone eavesdropped on his iPhone call while he was taking a sworn testimony during a client deposition, saying the bug exposed "one's most intimate conversations without consent". Williams has filed for damages based on claims of negligence, product liability, misrepresentation, and a warranty breach.

FaceTime gets an upgrade on iPhone 12, just in time for the pandemic

Apple unveiled its iPhone 12 lineup at its October event, and one feature that should be pretty useful during the pandemic flew under the radar. The iPhone 12 models have upgraded to FaceTime HD, meaning your video calls can be in 1080p while on WiFi or 5G networks. While the iPhone 12 and iPhone 11 both have a 12MP TrueDepth camera (a.k.a. the front-facing selfie camera), FaceTime HD is only available on the iPhone 12. So if you want your gorgeous face displayed in HD, you'll have to upgrade to the latest iPhone model, or invest in the new iMac, which also lets you FaceTime in HD. And just in case you really want to go all out on your FaceTime HD calls, here are a few suggestions for ring lights and microphones.

If you have an iPhone or a Mac you may want to turn off FaceTime: A new bug can let the people that call you to listen in to your conversations even if you don't answer the call. The bug, which was widely circulated on the internet Monday night after being spotted by 9to5Mac, is easily accessible. Those looking to exploit the bug simply need to start a FaceTime call, swipe up to add a person and enter your own phone number. This will create a group FaceTime call and automatically answer the call for the first person. Both the caller and the original recipient will be able to hear one another, or if the caller is quiet, allow them to eavesdrop if the recipient did not hear the original call.