We can take planning to be the optimization and debugging of a robot's program by reasoning about possible courses of execution. It is necessary to the extent that fragments of robot programs are combined at run time. There are several strands of research in the field; I survey six: (1) attempts to avoid planning; (2) the design of flexible plan notations; (3) theories of time-constrained planning; (4) planning by projecting and repairing faulty plans; (5) motion planning; and (6) the learning of optimal behaviors from reinforcements. However, we are already beginning to see how to mesh plan execution with plan generation and learning.

This paper presents a framework for motion planning with dynamics as hybrid search over the continuous space of feasible motions and the discrete space of a low-dimensional workspace decomposition. Each step of the hybrid search consists of expanding a frontier of regions in the discrete space using cost heuristics as guide followed by sampling-based motion planning to expand a tree of feasible motions in the continuous space to reach the frontier. The approach is geared towards robots with many degrees-of-freedom (DOFs), nonlinear dynamics, and nonholonomic constraints, which make it difficult to follow discrete-search paths to the goal, and hence require a tight coupling of motion planning and discrete search. Comparisons to related work show significant computational speedups.

This paper describes BUILD, a computer program which generates plans for building specified structures out of simple objects such as toy blocks. A powerful heuristic control structure enables BUILD to use a number of sophisticated construction techniques in its plans. Among these are the incorporation of pre-existing structure into the final design, pre-assembly of movable sub-structures on the table, and the use of extra blocks as temporary supports and counterweights in the course of the construction. BUILD does its planning in a modeled 3-space in which blocks of various shapes and sizes can be represented in any orientation and location. The modeling system can maintain several world models at once, and contains modules for displaying states, testing them for inter-object contact and collision, and for checking the stability of complex structures involving frictional forces.

We present a new algorithm to compute a collision-free trajectory for a robot manipulator to pour liquid from one container to the other. Our formulation uses a physical fluid model to predicate its highly deformable motion. We present simulation guided and optimization based method to automatically compute the transferring trajectory. Instead of abstract or simplified liquid models, we use the full-featured and accurate Navier-Stokes model that provides the fine-grained information of velocity distribution inside the liquid body. Moreover, this information is used as an additional guiding energy term for the planner. One of our key contributions is the tight integration between the fine-grained fluid simulator, liquid transfer controller, and the optimization-based planner. We have implemented the method using hybrid particle-mesh fluid simulator (FLIP) and demonstrated its performance on 4 benchmarks, with different cup shapes and viscosity coefficients. 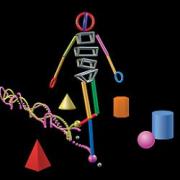 In recent years, robots play an active role in everyday life: medical robots assist in complex surgeries; search-and-rescue robots are employed in mining accidents; and low-cost commercial robots clean houses. There is a growing need for sophisticated algorithmic tools enabling stronger capabilities for these robots. One fundamental problem that robotic researchers grapple with is motion planning--which deals with planning a collision-free path for a moving system in an environment cluttered with obstacles.13,29 To a layman, it may seem the wide use of robots in modern life implies that the motion-planning problem has already been solved. This is far from true.