Inside the 'brain' of IBM Watson: how 'cognitive computing' is poised to change your life

During the British summer, conversations about sport become almost ubiquitous. This year, however, one participant in those conversations was very different: IBM Watson, IBM's cognitive intelligence. The All England Lawn Tennis Club knew that 2016 would feature unusually fierce competition for attention, with the Tour de France and Euro 2016 taking place alongside Wimbledon. More than ever before, social media was going to be a vital tool in directing that conversation, and directing attention to SW19. Wimbledon's "Cognitive Command Centre" – powered by Watson's intelligence running on a hybrid, IBM-managed cloud - scanned social media for emerging news and trends.

Most tennis fans would salivate over the chance to witness Serena Williams attempt to win Wimbledon and tie Steffi Graf's 22 Grand Slams, pulling within two of Margaret Court's 24 for the most major singles titles in women's tennis history. But for those unable to make the trip to London to witness the tournament, which is currently in full swing, IBM now offers a new way to experience the event via Wimbledon's official smartphone apps and website. In addition to improvements made to Wimbledon's official smartphone apps for iOS and Android and a new Apple TV app -- all of which IBM designed, built and hosts via its iX hosting team -- the company is also powering this year's tournament with its new Cognitive Social Media Command Center, which was built with the company's Watson and hybrid cloud technologies. Backed by Watson's ability to read and understand natural language, the Cognitive Command Center ingests feeds across several social media platforms. It separates conversations about Wimbledon from conversations about other sports going on right now -- like the Euro 2016 soccer tournament -- and pinpoints and highlights trending topics about Wimbledon itself. 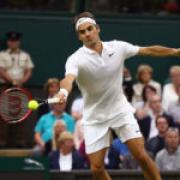 Reuters – Around half a million fans will attend this year's Wimbledon tennis championships. But that figure is dwarfed by the number talking about the on-court action on social media. Wimbledon and partner IBM are using artificial intelligence to keep their 10 million-strong digital audience engaged. "The opportunity you have to attract someone on social media is around six seconds," said Sam Seddon, IBM Client Executive for Wimbledon. "So understanding what they're interested in in that moment is really critical.

How AI is guarding Wimbledon's tennis traditions, and its digital future

Wimbledon's famous All England Lawn Tennis and Croquet Club, bedecked in the iconic purple and green and overflowing with Ivy, flowers and generations of tradition might, at first look, seem like a strange place to be contemplating how technology and sport have become such familiar bedfellows. And yet this most traditional of sporting environs is embracing technology on a whole host of levels, whilst maintaining the dignity and history as the home of tennis. Mick Desmond, the AELTC's commercial and media director explained that there was an "alchemy" in the balance of seeking what's new and innovative whilst understanding and enhancing what makes this most famous of tennis tournaments great. "We look at what's true in our brand in terms of the all-white dress code, the grass courts and the strawberries and cream, and as an event we do transcend the sport. We look at the things that make us special and we amplify them.

IBM has outlined how it's using its AI Watson to beat us all to the punch on the likes of Twitter and Facebook with the goal of capturing the attention of the ever-mysterious millennial. Watson is already doing some remarkable stuff in the realms of medical data, but the much-heralded artificial intelligence project is still probably best known for beating us mere mortal humans at US game show Jeopardy. However, Watson is currently turning its attention to the goings on at the All English Tennis and Croquet Club in Wimbledon, and owning social media is very much on his agenda. IBM's Sam Seddon explained that Watson is perfectly placed to dominate in this world, not least because he's not limited by all that meat and brain matter. "The challenge that we're addressing here is'how do you get a millennial to take an action within a six second window to interact with my social media rather than anyone else's?. "There's a limited opportunity window you have with young people on social media - people skim at speed and you do need the right content there that people see at the right point of time.