A Hawaiian Airlines spokesperson said via email the mission is for flight attendants to provide a "one-of-a-kind cultural experience by engaging with guests in both olelo Hawaii and English" as preservation of the Hawaiian language continues to be a hot issue on the islands.

Language localized in the brain 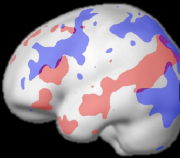 A map of the different brain areas that are active while a subject performs a language task (red) and a cognitive control task (blue), showing that nearby but distinct regions are used for each activity (credit: Fedorenko et al.) MIT researchers have found that there are parts of our brain dedicated only to language, a finding that marks a major advance in the search for brain regions specialized for sophisticated mental functions. Functional specificity refers to the idea that discrete parts of the brain handle distinct tasks. Scientists have long known that functional specificity exists in certain domains: in the motor system, for example, there is one patch of neurons that controls the fingers of your left hand, and another that controls your tongue. But what about more complex functions such as recognizing faces, using language or doing math? Are there special brain regions for those activities, or do they use general-purpose areas that serve whatever task is at hand?

The Foo Fighters' Dave Grohl played back-up acoustic guitar for his daughter Violet's rendition of Adele's "When We Were Young" and it's hard to imagine a more touching moment between a rock and roll dad and his talented daughter. The two performed the song on Saturday as part of the Notes & Words benefit concert, an annual event that raises money for the UCSF Benioff Children's Hospital. According to Rolling Stone, Grohl performed multiple other songs with Violet and his other daughter Harper as well, who plays drums, including covering Queen's "We Will Rock You." 'Saturday Night Live' ad for high school graduation is the most relatable thing Leslie Jones broke character at the perfect moment in this'SNL' Mother's Day sketch'The Handmaid's Tale' meets'Sex and the City' in this hilarious'SNL' sketch

'80s synth pop is always better when a toddler's on the mic. In the latest installment of Free Dad Videos, this dad and daughter duo tackle A-ha's "Take on Me" -- with predictably adorable results. Amelia has a great voice, TBH. 'Star Wars' fans, tell your friends: This sliding door sounds just like R2-D2 screaming

How to perform CPR on a dog