Painstaking preparation is in progress ahead of the planned rollout of coronavirus vaccinations by late February, with authorities holding a test run at a local gymnasium in Kawasaki where nurses simulated inoculations of volunteers. The drill involving some 60 people, each wearing a bib bearing the name of the role they are playing such as "doctor" and "person to be vaccinated," was held Wednesday in the city with a population of 1.5 million. The simulation was aimed at helping create a model for local government officials to use across the nation in their massive impending community vaccination drives. Social distancing measures were in place in the gym, with partitions set up to separate participants. The people undergoing mock vaccinations were asked to stay in the building for 15 to 30 minutes after they had received the shot as a precaution should they experience any serious allergic reaction. 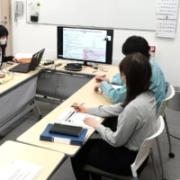 Tickets for COVID-19 vaccinations will be sent to people aged 65 or older in Japan from mid-March, according to the health ministry's vaccination schedule. The ministry presented the schedule at a briefing session for local governments on Monday. According to the ministry, the vaccination tickets will be sent to about 36 million older residents, who are third priority for vaccinations, after the first group of 10,000 to 20,000 medical workers and the second of 3.7 million other medical workers. Municipal governments, which will manage vaccination programs, are preparing to send the tickets, with a view to starting vaccinations as soon as late March. In Japan, work to approve U.S. drugmaker Pfizer Inc.'s vaccine is under way.

A total of 28 prefectures and large cities in Japan are either planning or considering setting up large-scale coronavirus vaccination sites to expedite the inoculations of older people, according to a Kyodo News survey. About 90% of those local governments will use the vaccine developed by Moderna Inc. of the United States and approved by the health ministry on Friday. Miyagi, Gunma, and Aichi prefectures will open their venues on Monday, followed by the city of Kobe on Tuesday, according to the survey conducted on 47 prefectural and 20 municipal governments from Tuesday to Friday. The central government will begin vaccinations at state-run mass vaccination sites in Tokyo and Osaka on Monday as it aims to complete the vaccinations of older people by the end of July. Japan's vaccination program lags behind other developed countries.

Japan is moving closer to COVID-19 vaccinations: Here's how the rollout will work

Japan's vaccine rollout is set to start in less than two weeks. But with the rollout in other countries, including the U.S., not going as smoothly as authorities would have wanted, there are worries that it could be chaotic for Japan, too. The rollout in Japan is the last among the Group of Seven nations, with the health ministry set to formally approve U.S. drugmaker Pfizer Inc.'s mRNA vaccine, developed jointly with Germany's BioNTech SE, on Feb. 15. The start of vaccinations for medical professionals will follow two days later, local reports say. Prime Minister Yoshihide Suga's administration aims to secure enough vaccines to cover all residents by the end of June. 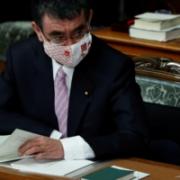 Taro Kono, newly appointed as minister in charge of rolling out COVID-19 vaccines, said Tuesday he would tackle the challenge with a complicated logistics plan to deliver an effective blitz of vaccinations quickly. "I will do my best so that more people can get safe and effective vaccines at the earliest possible date," he told a news conference after a Cabinet meeting. Hisayuki Fujii, state minister for the Cabinet Office, and Hiroshi Yamamoto, state minister for the health ministry, will support Kono in their roles as state ministers with responsibility for the rollout. Prime Minister Yoshihide Suga announced Monday night that Kono, the minister in charge of administrative reform, would oversee the distribution of novel coronavirus vaccines, as the administration attempts to recover from sinking approval ratings and simmering criticism over its handling of the pandemic. "Up until now, this matter has been dealt with under the supervision of individual Cabinet ministers led by the Prime Minister's Office team. To reinforce the structure (for the vaccine rollout) I have instructed Minister Kono to take on overall coordination," Suga said Monday evening.