Engineers create school of robotic fish that can coordinate their movements

A school of robotic fish that are able to coordinate their movements underwater - just like real fish - have been created by a team of engineers. Harvard University experts created the fish-inspired bots to work without any external control, mimicking the collective behaviours groups of fish demonstrate. Schools of fish exhibit complex, synchronised behaviours that help them find food, migrate and evade predators with no one fish coordinating the movements. The robotic fish can synchronise their movements like a real school of fish, without any external control - the first time this complex behaviour has been show in robots. The team say in future a similar swarm of robotic fish could be deployed to perform environmental monitoring and search in fragile environments like coral reefs. 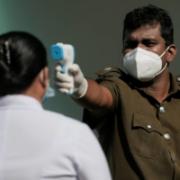 Washington – People returning to the office following the pandemic will find an array of tech-infused gadgetry to improve workplace safety but which could pose risks for long-term personal and medical privacy. Temperature checks, distance monitors, digital "passports," wellness surveys and robotic cleaning and disinfection systems are being deployed in many workplaces seeking to reopen. Tech giants and startups are offering solutions that include computer vision detection of vital signs to wearables that can offer early indications of the onset of COVID-19 and apps that keep track of health metrics. Salesforce and IBM have partnered on a "digital health pass" to let people share their vaccination and health status on their smartphone. Clear, a tech startup known for airport screening, has created its own health pass which is being used by organizations such as the National Hockey League and MGM Resorts.