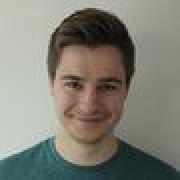 Out of all the many hundreds of thousands of people who attended the Women's March in Washington D.C. this weekend, the odds of meeting Steve Buscemi in the crowd must have been pretty low. SEE ALSO: Yes, Trump watched the Women's Marches, and yes, he tweeted about it What makes the photos below even more incredible, though, is that the guys who bumped into Buscemi were wielding a sign directly referencing one of his characters. On Sunday, two friends shared photos from the March on Reddit, where they quickly went viral. Yep, that's the classic line from The Big Lebowski delivered repeatedly by John Goodman's character throughout the film. "Steve showed up out of nowhere," commented Reddit user Squalor-.

When footwear mogul Jon Buscemi bought this Spanish-Colonial home in Los Feliz last year, he became the latest in a long line of celebrities to reside in the villa. Over the years, owners and tenants have included actresses Natalie Portman and Olivia Wilde, singer Joe Jonas, and Oscar-winning puppeteer Brian Henson. Now, Buscemi has become the latest to trade in his keys, selling the four-bedroom for $3.05 million, or about $200,000 more than he paid for the property last year. Saltillo tile flows from the courtyard through the front door, where vaulted ceilings hang over the entryway.

Starring Steve Buscemi as God, "Miracle Workers" Is Sappy, Juvenile, and Sharp All at Once

After death, it seems, fortunate mortals ascend to a plane of celestial mediocrity. "Congratulations on your completely random entry into Heaven," a functionary says on "Miracle Workers" (TBS), where the pearly gates resemble an elevator vestibule in an office park. The seven-episode comedy presents a vision of eternity as drudge work and office politics. Trolleys groan with interoffice envelopes at Heaven, Inc., as they trundle through a building with the profile of a chemical plant along the New Jersey Turnpike; the head of H.R.--or, rather, A.R., angel resources--is played by Angela Kinsey, from "The Office." The show depicts God's involvement in our world as the project of "an illiterate madman," managed from below by archangels.