Syria: 'This case is about saving humanity'

"Tomorrow, I'll be free," he told himself. Deep down, he knew this was not true, but holding onto the faint glimmer of hope kept him alive. He had not showered in months and felt weak from food deprivation. Every day, he was beaten with clubs, shocked with electric prods and hung by his arms from the wall, Darwish recalled. In August 2015, he was released.

Syrian deal to evacuate tens of thousands of people begins

The Syrian government and rebels on Friday began a coordinated population transfer of about 10,000 people from four towns besieged for years amid the country's bloody, six-year civil war. About 5,000 people were evacuated on 75 buses from two pro-government towns in northern Syria to the nearby city of Aleppo, said Abdul Hakim Baghdadi, who helped negotiate the arrangement. The predominantly Shiite Foua and Kfraya have remained loyal to the Syrian government while the surrounding Idlib province has come under hard-line Sunni, rebel rule. Near the capital of Damascus, about 60 buses carrying 2,350 opposition fighters, activists and their families departed from two opposition-held towns and headed in the direction of Idlib, according to the Britain-based Syrian Observatory for Human Rights monitoring group and Syrian state media. If the evacuations are completed, they would be the first in number of rounds stretching over two months to evacuate approximately 30,000 Syrians from besieged areas.

Syrian deal to evacuate tens of thousands of people begins 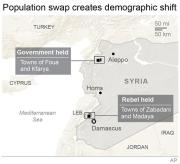 BEIRUT (AP) — The Syrian government and rebels began a coordinated population transfer Friday of about 10,000 people from four towns besieged for years amid the country's bloody, six-year civil war.

How one Syrian city is rebuilding life after ISIS

This story was done with the support of The Pulitzer Center on Crisis Reporting. JUDY WOODRUFF: Tonight, we conclude our three-part series about fighting ISIS, and life in northern Syria. The country has been ravaged by war. Many parts now lie in ruin. In the north, the grip of ISIS is slowly receding.

Mohamed al-Maleh was playing on the rooftop of a building in the Syrian town of Madaya when, his father said, a sniper hit him. The 12-year-old boy fell, severely injured in his head. Moussa al-Maleh rushed to get him treated. "He was a happy boy, but wasn't having a life of a normal child," he said, recalling Mohamed's routine living under government siege. "On the days of shelling, he would go to the basement with us.