Artificial intelligence is growing at an astounding rate, but are we ready for the consequences? Cosmologist and MIT physics professor Max Tegmark guides us through the state of artificial intelligence today, and the many paths we might take in further developing this technology. This Frontiers Lecture, moderated by Neil deGrasse Tyson, took place in the Museum's Hayden Planetarium on January 8, 2018. Max Tegmark will be participating in the 2018 Isaac Asimov Memorial Debate happening next week at the Museum. The podcast of that event will be available on February 15. ANNOUNCER: It is my pleasure to welcome not one but two of our amazing AMNH curators who will be introducing our presenter for the evening. First up we have Frederick P. Rose director of the Hayden Planetarium, Neil deGrasse Tyson. NEIL DEGRASSE TYSON (Frederick P. Rose Director of the Hayden Planetarium): Welcome to the universe. I've just got to see that that show of hands again, is this the first time you've ever attended a Hayden program? We've been here for 60 years.

The government is completely unprepared for the coming robot takeover, MPs warn

'Do You Trust This Computer?': Film Review

Chris Paine's first documentary, Who Killed the Electric Car?, worried that a technological advance was so game-changing -- in a good way -- that powerful corporations might never allow it to enter the world. In Do You Trust This Computer?, he looks the other direction: at developments in artificial intelligence, seen as terrifying even by some involved in creating them, that may be out in the world before we even realize we want to stop them. Though it shows some strain in containing the topic's inherent sprawl, the doc is more thoughtful than some of its predecessors, and benefits from interviews with newsmakers like Elon Musk and, even better, Westworld co-creator Jonathan Nolan. Things start unpromisingly, when a long, overheated string of sound bites leads into a clip of James Cameron's Termin-- what do you mean you've seen this documentary before? Quickly, though, the doc moves from Skynet and HAL 9000 to Nolan, who worries that sci-fi has "cried wolf enough times" that, with AI now a real-world threat, the public may not be able to take it seriously. 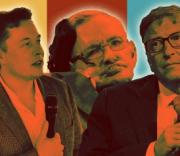 Artificial intelligence must be regulated to save humanity from being hit by its dangers, Google's boss has said. The potential damage the technology could do means it is "too important" not to be constrained, according to Sundar Pichai. While it has the potential to save and improve lives, it could also cause damage through misleading videos and the "nefarious uses of facial recognition", he wrote in the New York Times, calling on the world to work together to define what the future of AI should look like. Regulation would be required to prevent AI being influenced by bias, as well as protect public safety and privacy, he said. "Growing up in India, I was fascinated by technology. Each new invention changed my family's life in meaningful ways. The telephone saved us long trips to the hospital for test results. The refrigerator meant we could spend less time preparing meals, and television allowed us to see the world news and cricket matches we had only imagined while listening to the short-wave radio," he said.