Artist runs an electronic sound exhibit using his own blood

The effort involved in collecting the blood was as much a science experiment as the art itself. Vtol extracted just under 1.2 gallons of blood over the course of 18 months, and had to fill all but the very last sample with preservatives to prevent the fluid from going bad. As to why the artist would go to all this trouble? He describes it as a "symbolic act" where his life-giving fluid can power a device that's a figurative "extension of myself." It also parallels decades-old Russian philosophy and scientific concepts, where blood transfusion was seen as a metaphysical act -- you're literally sharing yourself with others.

Giving blood: 'We are reliant on blood donors to keep Henry alive'

Every blood donation "can save up to three lives", yet come December thousands miss vital appointments to give blood, as the festivities kick in. It can make a huge difference to patients like two-year-old Henry Alderson who needs blood transfusions every two weeks. When donors drop out in such numbers, bloods stocks inevitably dwindle. For Henry, from Harwich, Essex, it could mean the difference between a Christmas spent waiting up for Rudolph and crashing his toys into the tree - and a Christmas spent in bed. He has a rare condition called Diamond-Blackfan anaemia.

World Blood Donor Day 2018: Where And Why To Donate Blood

World Blood Donor Day is celebrated on June 14 every year -- an occasion started by the World Health Organization in 2004, in order to raise awareness about the importance of meeting a nation's basic requirements for blood and to prevent potential shortages. Last year's theme was "What can you do? Give often" -- as WHO sought to educate people that the typical response in an emergency scenario is always to ask how one could help. This year's slogan reads: "Be there for someone else. "Transfusion of blood and blood products helps save millions of lives every year.

Scientists may have found a way to create universal blood. Here's how it works. 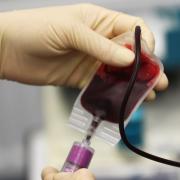 Scientists think that they've found the key to creating universal blood -- and it's in your poop. At a press conference held by the American Chemical Society earlier this week, a team of chemists lead by Steve Withers from the University of British Columbia announced that they were able to identify an enzyme -- found in gut bacteria -- that can make universal Type-O blood from other blood types. SEE ALSO: We may have a new weapon to fight dangerous superbugs (and we're gonna need it) What they've done is collected samples of this bacteria from human feces, let them cultivate the enzyme in a lab, and then applied the enzyme to Type A blood. If all goes according to plan in the lab, that enzyme converts the Type A blood into O. "The idea is that if you are able to cut the A and B sugars off of the red blood cells, you could transform it to the O blood cell," Withers said in an interview. Effectively, the team may have found a way to solve the blood shortage crisis that affects hospitals around the world.

Scientists believe they have found a reliable way to transform donor blood into the universal type needed for safe, emergency blood transfusions. The discovery is enzymes from gut bacteria that can efficiently turn type-A human blood into type-O. Type-O blood is special because it can be donated to anyone without the risk of a bad mismatch reaction. The researchers, from the University of British Columbia, say clinical trials of the treatment could begin soon. The gut bug enzymes remove markers from the surface of the donor red blood cells present in type A but not in type O. Stripping them away means the recipient's immune system will think the donor type-A blood is type-O and will not attack it for being "foreign".