The funds committed to fossil fuel divestment now total more than $6tn (£4.6tn), with almost 1,000 institutional investors having made the pledge, according to a new report. The sell-off of coal, oil and gas investments is led by the insurance industry, with $3tn of funds. But it also now includes the first nation to divest, Ireland, major cities including New York and key medical organisations. Major oil companies such as Shell have this year cited divestment as a material risk to its business. Fossil fuel divestment began on US university campuses in 2011 but now spans 37 nations around the world. 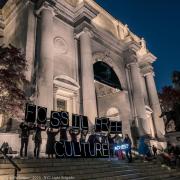 One of the world's biggest and most prestigious museums is cutting financial ties to the fossil fuel industry. The American Museum of Natural History (AMNH) on Monday said it had joined the global movement to divest from coal, oil and natural gas companies. The New York City institution said the move aligns with its longstanding efforts to help protect the fragile planet. "We hope we can achieve our collective goal of global sustainability while maximizing the resources each of our institutions brings to bear on this vital issue," Daniel Stoddard, AMNH's chief investment officer, wrote in a letter to environmental groups. The museum's announcement arrives as the worldwide divestment movement is gaining steam.

New York City's decision to sever ties with its fossil fuel investments is set to prove a catalyst to other cities in the face of the Trump administration's staunch support for coal, oil and gas interests, according to several leading economists.

Why my council pension fund is divesting £1.2bn from fossil fuels

Data released on 9 November shows that the UK's local authorities invest more than £16bn into companies that extract oil, gas and coal. Collectively, the country's local government pension funds have nearly £3,000 invested in fossil fuels for every pension fund member. Southwark has decided we will no longer do this. In December 2016, Southwark council pension fund made a landmark commitment. Following more than a year of consultation, deliberation and work with community groups we announced a decision to divest the £1.2bn fund from fossil fuels.

As New York and London mayors, we call on all cities to divest from fossil fuels Bill de Blasio and Sadiq Khan

This summer it seemed as if our two cities had changed places. London was hot and dry while New York had days and days of rain. According to leading scientists, the heatwave in Europe over recent months was made twice as likely by climate change resulting from human activity. There is also growing evidence of the link between climate change and the frequency of major floods, as well as the severity of hurricanes. It's clear that what we think of now as freak weather in our cities is likely to become the new normal, and that climate change poses a huge threat to the futures of our children, and many generations to come.