Afghan officials have raised the death toll from a coordinated Taliban attack on a government security agency to 28. Kabul Police Chief Gen. Abdul Rahman Rahimi told reporters Tuesday that another 327 people were wounded in the assault -- which began with a powerful suicide car bomb attack on the agency compound gates. A group of armed militants then entered the compound and waged a prolonged battle with government security forces. The agency is similar to the U.S. Secret Service, providing personal protection for high-ranking government officials. The Taliban has claimed responsibility for the attack.

Gunmen who raided a government building in the Afghan capital have killed at least 28 people - mostly government employees - in a seven-hour standoff with security forces that ended on Monday night, Afghan authorities said. More than 20 others were wounded in the latest round of bloody violence to strike Kabul. Others killed included a policeman and three of the attackers who were shot dead by Afghan security forces, Interior Ministry spokesman Najib Danish said. The attack began in the afternoon when a suicide bomber blew himself up in a car outside the public works ministry. Gunmen then stormed the building of the National Authority for Disabled People and Martyrs' Families, taking civilians hostage as they fought a gun battle against Afghan soldiers.

Armed militants in Afghanistan stormed a key government security agency in the capital Tuesday morning as part of a coordinated assault, killing at least 28 people and wounding more than 320. The Taliban claimed responsibility for the attack, which included a suicide car bombing. It appeared to have targeted an agency similar to the U.S. Secret Service, providing personal protection for high-ranking government officials. Gen. Abdul Rahman Rahimi, the Kabul police chief, said that at least 28 people were killed in the attack, which began when a suicide car bomber struck near the agency compound's gates. After the explosion, armed gunmen stormed the compound and waged a prolonged battle with government security forces. 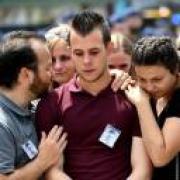 KABUL – Islamic State militants, including two suicide bombers, dressed in military uniforms and riding in two armored vehicles launched a surprise attack on the Interior Ministry in Kabul on Wednesday but Afghan forces managed to repel the assault, leaving all the attackers dead. It was a rare victory for Afghan security forces, who have struggled to secure the capital in recent months amid relentless attacks by the Taliban and the IS affiliate in Afghanistan. According to the ministry spokesman, Najib Danish, one policeman was killed and five were wounded in the assault. The attack began around noon when a group of 10 militants tried to storm the ministry compound in Kabul, Danish said. Two of the attackers detonated their explosives, allowing eight others to pass through an outer gate at the ministry where they traded fire with security forces before they were eventually killed.

Taliban claim wave of attacks across Afghanistan deadly to at least 74, including civilians at passport office

KABUL – The Taliban unleashed a wave of attacks across Afghanistan on Tuesday, targeting police compounds and government facilities with suicide bombers in the country's south, east and west, and killing at least 74 people, officials said.