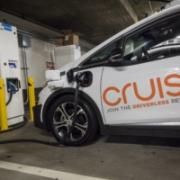 The Vision Fund's investment values the business at $11.5 billion. GM shares surged 11% to $42.07 in morning trading. The Vision Fund's investment will come in two tranches: an initial $900 million payment, and another of $1.35 billion once Cruise's autonomous vehicles are ready for commercial deployment, GM said. The deal will "afford GM increased flexibility with respect to capital allocation" as it plows more money into developing a network of autonomous ride-share vehicles, targeted for sometime next year, the company said. For years, GM's shares have languished as valuations for upstarts like electric-car maker Tesla Inc. and ride-share firm Uber Technologies Inc. soared on expectations of heady growth.

Microsoft teams up with Cruise and GM on self-driving cars

Cruise and GM have enlisted an important ally in their quest to make self-driving cars a practical reality. The two have entered a "long-term strategic relationship" with Microsoft to speed up the commercialization of autonomous vehicles. Cruise will use Microsoft's Azure cloud platform to deliver self-driving tech "at scale," while Microsoft will draw on Cruise's know-how to serve transportation companies. GM will treat Microsoft as its preferred cloud provider, too. There's money involved, to no one's surprise.

Money Map Press chief investment strategist Keith Fitz-Gerald says he's excited about GM's new self-driving car but says society won't be ready for it for at least a decade. Cruise, General Motors' autonomous car subsidiary, is set to unveil its first fully driverless car on Tuesday in San Francisco, according to Bloomberg. Cruise has been developing self-driving technology with the goal of launching a ride-hailing service similar to Uber or Lyft and has a press conference scheduled for 4 pm PST. Sources familiar with the details of the event told the news outlet that, unlike the Chevrolet Bolt electric cars Cruise has been testing on the streets of San Francisco with human monitors, the vehicle will not have a steering wheel or pedals. It's an idea the company first pitched two years ago with an image of a Bolt's interior without the controls as it began petitioning the National Highway Transportation Safety Administration to allow it to build and deploy such a vehicle on public roads.

"So that's a step or two beyond what we'll be doing initially with this permit," said Dan Ammann, Cruise's chief executive. "It's not too far down the road," he said, but declined to share a timeline. In a blog post, he added, "We're not the first company to receive this permit, but we're going to be the first to put it to use on the streets of a major U.S. city." It will be an important step for Cruise to charge customers. For any of the companies to start making money in California, a separate permit is required, state officials said.