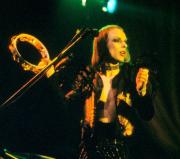 Stephon Alexander is a theoretical physicist and jazz musician.

The Beach Boys, an American rock band, released its legendary genre-bending record "Pet Sounds" 50 years ago Monday. And though music has changed significantly over the past five decades, fans' appreciation of the experimental album has only grown. Speaking to the Toronto Sun, producer Jeff Levenson said "Pet Sounds" is "a pinnacle of artistic achievement that defies boundaries." Pop Matters called it "a pillar of pop excellence." Rolling Stone wrote frontman Brian Wilson "had leading musical figures struggling to match his technical innovation, lyrical depth and melodic genius" -- and "half a century later, it's questionable whether anyone has."

A generative music app, Reflection, has been developed by music pioneer, producer and artist Brian Eno and musician and software designer Peter Chilvers. The app follows rules but plays differently each time you listen. Months were spent tweaking the rules and probabilities and when they are combined cause the sounds to randomly echo, transpose, bounce or not play at all.

How Chilling With Brian Eno Changed the Way I Study Physics

Everyone had his or her favorite drink in hand. There were bubbles and deep reds, and the sound of ice clinking in cocktail glasses underlay the hum of contented chatter. Gracing the room were slender women with long hair and men dressed in black suits, with glints of gold necklaces and cuff links. But it was no Gatsby affair. It was the annual Imperial College quantum gravity cocktail hour. The host was dressed down in black from head to toe--black turtleneck, jeans, and trench coat.

Artificial Intelligence, Brian Eno And The Displacement Of Air: The Making Of Halldór Eldjárn - The Reykjavik Grapevine

Musician Halldór Eldjárn has been drawing a lot of attention recently for his AI-approach to composing, as well as his homemade percussion-playing robots. Here's what has made him the artist he is today. The concept of generating music has always fascinated me. My uncle, Kjartan Ólafsson, has worked in this field for decades, creating an AI-driven music composition software called Calmus. He definitely made me realise it was possible to make a computer write music.