Modem for a Quantum Leap

Quantum computers take advantage of the weird mechanics of the subatomic world to quickly complete calculations that would stump even the most powerful supercomputers. Today's quantum machines are still largely experimental, but many experts predict that the quantum computers of tomorrow will have nearly limitless applications, helping us cure diseases, explore the cosmos, and harness the full potential of AI. The only thing more powerful than a single quantum computer would be a network of them, which is why the development of a quantum internet is also near the top of physicists' to-do lists. In the future, a quantum internet could be used to connect quantum computers located in different places, which would astronomically increase their computing power. It will convert digital data from one computer into signals that can be transmitted via optical fiber cables to other computers. 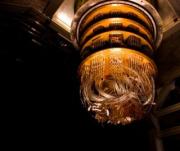 Google just took a quantum leap in computer science. Using the company's state-of-the-art quantum computer, called Sycamore, Google has claimed "quantum supremacy" over the most powerful supercomputers in the world by solving a problem considered virtually impossible for normal machines. The quantum computer completed the complex computation in 200 seconds. That same calculation would take even the most powerful supercomputers approximately 10,000 years to finish, the team of researchers, led by John Martinis, an experimental physicist at the University of California, Santa Barbara, wrote in their study published Wednesday (Oct. "It is likely that the classical simulation time, currently estimated at 10,000 years, will be reduced by improved classical hardware and algorithms," Brooks Foxen, a graduate student researcher in Martinis' lab, said in a statement.

Powerful computers capable of mind-boggling calculations have moved'a step closer' to reality, thanks to a breakthrough at Intel.

Quantum cheques could be a forgery-free way to move money

A quantum upgrade could make old-fashioned cheques the most secure way to send money. Researchers have proven that quantum computers could in theory create and cash cheques that are nearly impossible to forge. Quantum computers store information using qubits which, unlike the ones and zeros of classical computing, can exist in two states simultaneously. This is known as quantum superposition. But it's impossible to observe a qubit while it's in a superposition – it collapses into either a one or zero as soon as you measure it.

D-Wave will ship a 2,000-qubit quantum computer next year 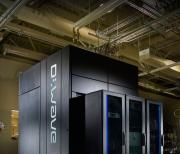