In the age of surveillance, trust nothing: not your iPhone, not your fridge Arwa Mahdawi

It has been a terrible week for Apple. Not only did the tech company report its first decline in revenues and profits in more than a decade, but it was embroiled in an embarrassing privacy scandal. A much-discussed bug in its FaceTime app meant that, in certain circumstances, you could turn someone's iPhone into an all-seeing, all-hearing spying device. The glitch was a blow to Apple's reputation for security, and a reminder that our smartphones are essentially surveillance tools. Even if your apps aren't riddled with bugs or malware, your phone is probably transmitting more of your private information than you realise.

The doorbells have eyes: The privacy battle brewing over home security cameras

Ding-dong, your doorbell is looking a bit creepy. Ring video doorbells, Nest Hello and other connected security cameras are the fastest-growing home improvement gadgets since garage-door openers. These cameras, often built into buzzers, alert your phone when someone is at your door and save footage online. Mine has helped me get deliveries and catch porch pirates stealing packages. Earlier this month, one caught a man licking a family's doorbell for three hours.

Police departments across the U.S. are asking residents to register their security cameras so they can quickly request footage if an incident occurs nearby. More than 405 police forces nationwide have joined video-sharing partnerships with the doorbell-camera company Ring, giving officers potential access to camera footage taken at front doors of private homes in numerous neighborhoods, company officials said Wednesday. The doorbell-camera devices can stream real-time video to a user's smartphone, tablet or desktop, allowing homeowners to see and talk to people on their doorsteps. The impact is enhanced if an owner chooses to join Neighbors, an app developed by Ring that shares information among nearby residents, including the locations of their video or written posts. Neighbors operates as an open forum for people to ask one another about suspicious activities.

With Magic Leap's New Patent, Is Identity Security Its Next AR Ambition? 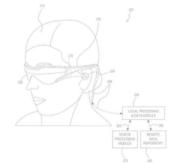