Nineteen leaders of the world's biggest economies and a representative of the European Union are set to meet on Friday and Saturday in Buenos Aries, Argentina as part of the Group of 20 summit. This year, all eyes will be on a range of issues, including a high-stakes meeting between US President Donald Trump and his Chinese counterpart Xi Jinping and the potential signing of the US-Mexico-Canada Agreement (USMCA). Saudi Crown Prince Mohammed bin Salman's appearance at the summit is expected to cause some protests over the murder of Saudi writer Jamal Khashoggi. Other demonstrations are also expected in the lead-up to the annual meeting. Russian President Vladimir Putin will discuss the murder of Saudi journalist Jamal Khashoggi at the G20 in Buenos Aires, his foreign policy advisor Yuri Ushakov said on Wednesday.

MBS arrives in Argentina in the face of G20: Will he be a pariah?

Saudi Arabia's Crown Prince Mohammed bin Salman has arrived in Buenos Aires in the run-up to the G20 summit, a visit fraught with controversy over the killing of Saudi journalist Jamal Khashoggi. Human Rights Watch asked Argentina on Monday to use the war crimes clause in its constitution to investigate any involvement by the crown prince in possible crimes against humanity in Yemen and Khashoggi's murder. The killing of Khashoggi, a Washington Post columnist and a critic of the crown prince, at Riyadh's consulate in Istanbul six weeks ago, has strained Saudi Arabia's ties with the West and battered Prince Mohammed's image abroad. Saudi Arabia has said the prince, the kingdom's de facto ruler, had no prior knowledge of the murder. Prince Mohammed arrived in Buenos Aires from Tunisia, where he was met by protesters who denounced him as a murderer for the killing of Khashoggi. 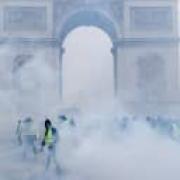 BUENOS AIRES – Russian President Vladimir Putin walked up to Saudi Arabia's Crown Prince Mohammed bin Salman at a summit of Group of 20 world leaders, high-fived him and then shook his hand heartily. Moments earlier the prince had been pictured on the far edge of the traditional "family portrait" photograph, ignored by other leaders. The two moments captured the dilemma facing world leaders at the G20 summit in Buenos Aires this weekend: How to deal with the crown prince, who is dogged by controversy over the murder of a Saudi journalist but is also de facto leader of a rich, oil-producing kingdom that is a major global investor. To be sure Putin's exuberant greeting of the prince was seen as over the top and promptly went viral. But, while leaders appeared to ignore Prince Mohammed on stage during the "family photo," many went on to have closed-door bilateral meetings with him during the two-day summit.

Turkish President Recep Tayyip Erdogan demanded on Saturday that Saudi Arabia extradite suspects in the killing in Istanbul of columnist Jamal Khashoggi, saying the kingdom was not cooperating. At a summit of the Group of 20 in Buenos Aires, the Turkish leader took a firm tone on Saudi Crown Prince Mohammed bin Salman. Saudi Arabia has announced the detention of 18 nationals and vowed to probe the killing of Khashoggi, a royal confidant turned critic who was killed and dismembered when he visited the kingdom's Istanbul consulate on October 2 to handle paperwork for his planned wedding. "It's essential that these people are tried in Turkey in order to eliminate any question marks that the international community may have," Erdogan told reporters. "Whoever has ordered and implemented this violent crime should be found out at once. Unless the perpetrators are found out, the whole world and the Islamic community shall not be satisfied."