Video: Can hyperscale data centers run on flash? US startup builds the architecture. Intel has unveiled its new Optane DC persistent memory modules, offering data centers what it describes as an entirely new class of memory and storage technology. The Optane DC persistent dual in-line memory modules (DIMMs) are based on Intel's 3D XPoint technology instead of DRAM. The forthcoming memory modules differ from the already-available Optane SSDs, which also use 3D XPoint.

Intel first publicly discussed their 3D Point technology (developed with Micron) at the 2015 IDF and more boradly at the 2016 Storage Visions Conference. They introduced an NVMe SSD using their renamed Optane technology in 2017. Intel has now announced availability of Optane technology on a DDR4 memory channel. Providing Optane on the computer/server memory channel should allow using Optane most effectively as a non-volatile extension of DRAM. Intel sees DDR-based Optane as filling the gap between fast storage (SSDs) and DRAM memory.

When it jointly announced 3D XPoint memory with Micron a couple of years back, it was clear where Intel was ultimately headed with the technology. To quickly recap, 3D Xpoint is a bleeding-edge, non-volatile memory type that can offer significantly better performance than NAND flash memory, but with DRAM-like access times. When it was initially announced, Intel and Micron claimed that 3D XPoint was 1000x faster than NAND, with 1000x the endurance, but with 10x the density potential than DRAM. To date, 3D Xpoint memory has been used only in solid state storage products like Intel's Optane Memory caching solutions and Optane SSDs. But the company just released some details regarding its upcoming Optane DC Persistent Memory and it has the potential to revolutionize Datacenters and big data analytics as a whole. 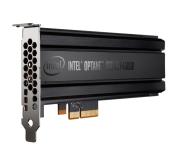 Intel's first Optane storage modules came out in early January, but were only 32GB. Larger Optane drives with up to 1.5TB of storage capacity are on their way, and we now have a better understanding of how they're going to perform. The first large-capacity Optane SSD drive is the DC P4800X, which has 375GB of storage and started shipping on Sunday. The $1,520 SSD is targeted at servers. Intel says an enterprise Optane SSD with 750GB will ship in the second quarter, and that a 1.5TB SSD will ship in the second half of this year.

Intel has announced a new member of its Optane series, the H10 that adds some of the company's 3D NAND storage beside its Optane 3D XPoint memory on a single M.2 drive. Initially, the H10 will be offered in three combinations: A 16GB Optane chip with 256GB storage; 32GB of 3D XPoint and 512GB of storage; and 32GB of Optane with 1TB of storage. Aimed the light and thin laptop market, Intel said it expects the largest two combinations to have the highest volume, and will target them at laptops over the $1,000 mark. The H10 will initially be available in 8th-generation Core U-based laptops in the United States through Best Buy in May, produced by the likes of Dell, HPI, and Asus. No pricing details were provided by Intel.