Workers in New Orleans removed the first of four prominent Confederate monuments Monday morning, becoming the latest Southern institution to sever itself from symbols viewed by many as a representation of racism and white supremacy. The Liberty Place monument, which commemorates whites who tried to topple a biracial post-Civil War government in New Orleans, was taken away on a truck in pieces around 5:35 a.m. after a few hours of work. The removal happened early in the morning in an attempt to avoid disruption from supporters who want the monuments to stay, some of whom city officials said have made death threats. Workers who took the monument down Monday could be seen wearing bulletproof vests, military-style helmets and scarves that obscured their faces. Police were also on hand, including officers who watched the area from atop the parking garage of a nearby hotel.

Workers in New Orleans began removing the first of four prominent Confederate monuments early Monday, the latest Southern institution to sever itself from symbols viewed by many as a representation racism and white supremacy. 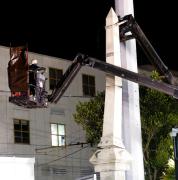 NEW ORLEANS (AP) — A monument to a deadly white-supremacist uprising in 1874 was removed under cover of darkness by workers in masks and bulletproof vests Monday as New Orleans joined the movement to take down symbols of the Confederacy and the Jim Crow South.

The imminent removal of three Confederate statues was met with protests Sunday in New Orleans. More than 700 people were present at the demonstrations, some of whom believed the monuments stood for white supremacy while others argued that they merely represented the storied history of the south. The plan to remove four Confederate statues (one was removed in April) was announced by Mayor Mitch Landrieu in 2015 and met with scorn from some and support from others. Supporters championed the idea as a way to rid New Orleans of what they believed were clear symbols of racism. "In the name of the good people of New Orleans, in honor of our civil rights veterans who fought for decades for their removal, in appreciation of the Black community, elders and youth Take Em Down NOLA is issuing this call for everyone to come out!" the anti-monument group Take Em Down NOLA wrote in a call for protesters on its website.

A Confederate monument in New Orleans will be relocated after it was disassembled Monday morning. The statue is one of four prominent Confederate monuments that will be removed from New Orleans' city center. Amid protests from some -- and celebration from others -- The Liberty Place monument, a large and historic obelisk located at one end of Iberville Street, was deconstructed by local authorities in the early morning hours, the Associated Press reported. The Louisiana city is in the process of taking down four major Confederate monuments and statues, some of which include the Robert E. Lee statues at Lee Circle and the Jefferson Davis statue. The Liberty Place statue was the first to go.