AI has the potential to generate meaningful returns for the enterprise. Responding to a 2018 PricewaterhouseCoopers survey, 54% of business executives say that their adoption of AI within the workplace has led to a boost in productivity. A separate 2019 McKinsey report found that 44% of firms using AI achieved a reduction in business costs in departments where AI is implemented. But barriers stand in the way of deployment, including a lack of production-grade data and expensive tools and development processes. Among the top challenges enterprises face in adopting AI is an absence of in-house talent.

InstaDeep, one of the leaders in the design of decision-making Artificial Intelligence systems, announced on January 25 that it had raised $100 million (€88 million). The company closed a Series B round led by DeepTech investment firm Alpha Intelligence Capital and supported by CDIB. BioNTech, Chimera Abu Dhabi, Deutsche Bahn Digital Ventures, Google, G42 and Synergie participated in this latest round. Founded in 2014 by Karim Beguir and Zohra Slim, InstaDeep is a leader in decision AI systems, it has been named two years in a row to the CB Insights AI 100 ranking of the world's 100 most promising private artificial intelligence companies. The company develops patented AI products such as its DeepChainTM protein design platform and collaborates with leading companies such as Google DeepMind, Nvidia and Intel. 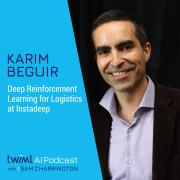 Today we are joined by Karim Beguir, Co-Founder and CEO of InstaDeep. InstaDeep, based in Tunisia, Africa, is focused on building advanced decision-making systems for the enterprise. Karim's goal is to show that advanced AI and Deep Learning is taking place in Africa, solving real-world problems and building a new generation of talent in the AI industry. With offices around the world, InstaDeep works with large companies in multiple industries with this episode focusing on logistical challenges, like ride-sharing and container shipping. These problems require decision-making in complex environments with a large number of choices.

In the news this week: A bevy of partnerships to bring artificial intelligence (AI) and machine learning (ML) to medical applications, and more. Keeping pace with news and developments in the real-time analytics market can be a daunting task. We want to help by providing a summary of some of the items our staff came across each week. The use of artificial intelligence (AI) and machine learning (ML) in healthcare and medical diagnosis is perhaps one of the most promising applications of the technology for the public good. Frequently, the main inhibitor to the use of AI in these fields is the lack of internal familiarity with the technology.

One of the longest-running challenges in the logistics industry is finding the shortest routes. First articulated in the 1930s, the "traveling salesman problem" seeks to deduce the shortest route connecting a group of cities to ensure optimal use of time and resources. Karim Beguir, co-founder and CEO of London-based AI startup InstaDeep, told GPU Technology Conference attendees this week that GPU-powered deep learning and reinforcement learning may have the answer. Previous efforts to address the traveling salesman problem include optimization solvers, heuristics and Monte Carlo Tree Search algorithms. But, according to Beguir, these approaches all suffer from the same shortcoming: They don't learn.