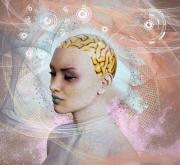 "How are you doing today?" "What's going on in your world right now?" "How do you feel?" These might seem like simple questions a caring friend would ask. However, in the present day of mental health care, they can also be the start of a conversation with your virtual therapist. Advancements in artificial intelligence (AI) are bringing psychotherapy to more people who need it. It is becoming clear that AI for mental health could be a game changer.

When Your Therapist Is a Facebook Chatbot – The Ringer

When Alison Darcy began developing a mental-health-focused chatbot for Facebook last summer, she made a point to give it a robotic name -- nothing even vaguely human, like Siri or Alexa. She went with something charmingly mechanical: Woebot. Her service uses lessons from a short-term, goal-oriented psychotherapy method known as cognitive behavioral treatment to help people track their moods, and the name clarified that it was by no means a human replacement. It also showed off what Darcy saw as her program's greatest strength. "This is not a person that is ever going to judge me," the clinical research psychologist and former Stanford instructor said.

"How are you doing today?" "What's going on in your world right now?" "How do you feel?" These might seem like simple questions a caring friend would ask. However, in the present day of mental health care, they can also be the start of a conversation with your virtual therapist. Innovative technology is offering new opportunities to millions of Americans affected by different mental health conditions. Advancements in artificial intelligence (AI) are bringing psychotherapy to more people who need it.

On Oct. 22, 2012, three days before she slaughtered two of the three children she cared for as a nanny, Yoselyn Ortega visited a psychologist, Dr. Thomas A. Caffrey, on New York City's Upper West Side. He was the kind of guy you'd hope a person on the verge of committing murder would go to see: He had a doctorate in clinical psychology, more than 40 years of clinical experience, and a specialty in forensic psychology--the psychology of criminals. He'd worked for years within the prison system and was a former president of the New York State Psychological Association's forensic division. According to the testimony Caffrey gave in the trial that found Ortega guilty of murder just last week, after the perhaps 40-minute session (length remains controversial), he wrote down "Prognosis: good." He did not record having a follow-up appointment, although he says he expected one.

Can Artificial Intelligence Be An Effective Therapist?

Over 450 million people are currently affected by mental or neurological disorders and it is estimated that one in four people will be affected by such condition in the coming years. With the rapid advancement in technology and its application in the medical field, researchers and medical practitioners are now looking at ways in which artificial intelligence and machine learning can be leveraged to detect early symptoms and potential cure for various mental illness. Over the years, considerable advancements have been made in this regard and AI-powered solutions such as NLP and even chatbots have been designed to understand the human mind. We look at ways in which these solutions are helping psychiatrists and other mental health professionals deliver their job better and the potential harm associated with these technologies. Several startups have combined AI and virtual reality to create a virtual therapist that can interact with is patients in real-time.