A radical new'negative emissions' power plant has begun operations in Iceland. Although still at pilot scale, researchers hope the scheme could be scaled up across the globe. One of the world's largest geothermal power plants in Hellisheidi, Iceland, where CO2 is currently injected and mineralized at an industrial scale in a groundbreaking trial The CO2 reacts with the basaltic bedrock and forms solid minerals, creating a permanent storage solution. The team behind it this week confirmed a testing phase has started during which the CO2 is captured from ambient air, bound to water, and sent to more than 700 meters underground. Currently the pilot system captures only 50 metric tons CO2, each year, about the same emitted by a single US household.

Efforts to suck carbon from air must be ramped up

The nation needs to ramp up efforts to suck heat-trapping gases out of the air to fight climate change, a new U.S. report said. The report Wednesday from the National Academy of Sciences says technology to do so has gotten better, and climate change is worsening. By mid-century, the world needs to be removing about 10 billion metric tons of carbon dioxide out of the air each year. This illustration provided by Carbon Engineering in October 2018 shows one of the designs of the company's air contactor assemblies to remove carbon dioxide from the atmosphere Last year the world put nearly 37 billion metric tons of carbon dioxide into the air, and emissions have been rising. Steve Pacala, Princeton University biologist and chair of the panel, said in an interview that having ways to remove heat-trapping gases from the atmosphere would make the job of tackling climate change'much easier.'

In an industrial greenhouse about 30km from Zurich, plump aubergines and juicy cherry tomatoes are ripening to perfection. Growing Mediterranean crops in Switzerland would traditionally be energy intensive but these vegetables are very nearly carbon-neutral. The greenhouse uses waste energy from a nearby refuse plant, and carbon dioxide from the world's first commercial direct air capture plant. The facility, designed by Zurich-based start-up Climeworks, pumps the gas into greenhouses to boost the plants' photosynthesis and increase their yield, it hopes, by up to 20%. Climeworks says it will extract around 900 tonnes of CO2 a year from the air. 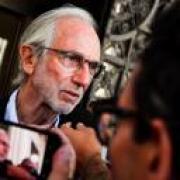 OSLO – A small Swiss company won $31 million in new investment on Tuesday to suck carbon dioxide from thin air as part of a fledgling, costly technology that may gain wider acceptance from governments in 2018 as a way to slow climate change. Climeworks AG, which uses high-tech filters and fans to extract carbon dioxide from the atmosphere at a cost of about $600 a ton, raised the money from investors, including Zurich Cantonal Bank. "It's all about cost reductions," Jan Wurzbacher, a co-founder and co-CEO of Climeworks, told Reuters of how the company would use the funds. Extracting vast amounts of carbon dioxide from the atmosphere could help to limit global warming, blamed for causing more heatwaves, wildfires, floods and rising sea levels. The company says it has a long-term "vision" of capturing 1 percent of man-made carbon dioxide emissions by 2025.

Scientists are sucking carbon dioxide from the air with giant fans and preparing to release chemicals from a balloon to dim the sun's rays as part of a climate engineering push to cool the planet. Backers say the risky, often expensive projects are urgently needed to find ways of meeting the goals of the Paris climate deal to curb global warming that researchers blame for causing more heatwaves, downpours and rising sea levels. The United Nations says the targets are way off track and will not be met simply by reducing emissions for example from factories or cars - particularly after U.S. President Donald Trump's decision to pull out of the 2015 pact. In the countryside near Zurich, Swiss company Climeworks began to suck greenhouse gases from thin air in May with giant fans and filters in a $23 million project that it calls the world's first'commercial carbon dioxide capture plant' The Paris Agreement seeks to limit a rise in world temperatures this century to less than 2 degrees Celsius (3.6 Fahrenheit), ideally 1.5C (2.7F) above pre-industrial times. But U.N. data show that current plans for cuts in emissions will be insufficient, especially without the United States, and that the world will have to switch to net'negative emissions' this century by extracting carbon from nature.