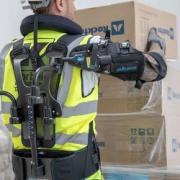 The EksoVest supports the wearer's arms during lifting. Millions of people Suffer from the effects of spinal cord injuries and strokes that have left them paralyzed. Millions more suffer from back pain, which makes movement painful. Exoskeletons are helping the paralyzed to walk again, enabling soldiers to carry heavy loads, and workers to lift heavy objects with greater ease. An exoskeleton is a mechanical device or soft material worn by a patient/operator, whose structure mirrors the skeletal structure of the operator's limbs (joints, muscles, etc.).

If humans walked like robots, engineers already would have perfected zero-effort, mechanically-assisted walking. But what about people who bounce on their toes, power walkers, those who sashay? Habits, diseases, and disabilities can affect someone's gait in unique ways. An idealized exoskeleton needs to be both easily accessible and personalized. The Chipotle of exoskeletons doesn't quite exist yet.

Human-centered design of wearable robots involves the development of innovative science and technologies that minimize the mismatch between humans’ and machines’ capabilities, leading to their intuitive integration and confluent interaction. Here, we summarize our human-centered approach to the design of closed-loop brain-machine interfaces (BMI) to powered prostheses and exoskeletons that allow people to act beyond their impaired or diminished physical or sensory-motor capabilities. The goal is to develop multifunctional human-machine interfaces with integrated diagnostic, assistive and therapeutic functions. Moreover, these complex human-machine systems should be effective, reliable, safe and engaging and support the patient in performing intended actions with minimal effort and errors with adequate interaction time. To illustrate our approach, we review an example of a user-in-the-loop, patient-centered, non-invasive BMI system to a powered exoskeleton for persons with paraplegia. We conclude with a summary of challenges to the translation of these complex human-machine systems to the end-user.

Robotic arms and temporary motorisation – the next generation of wheelchairs

Next-generation wheelchairs could incorporate brain-controlled robotic arms and rentable add-on motors in order to help people with disabilities more easily carry out daily tasks or get around a city. Professor Nicolás García-Aracil from the Universidad Miguel Hernández (UMH) in Elche, Spain, has developed an automated wheelchair with an exoskeleton robotic arm to use at home, as part of a project called AIDE. It uses artificial intelligence to extract relevant information from the user, such as their behaviour, intentions and emotional state, and also analyses its environmental surroundings, he says. The system, which is based on an arm exoskeleton attached to a robotised wheelchair, is designed to help people living with various degrees and forms of disabilities carry out daily functions such as eating, drinking, and washing up, on their own and at home. While the user sits in the wheelchair, they wear the robotised arm to help them grasp objects and bring them close -- or as the whole system is connected to the home automation system they can ask the wheelchair to move in a specific direction or go into a particular room.

Exoskeletons are mechanical structures applied externally to the body and its functions is the improve movement, hold the body of people suffering from an injury or increase physical strength to lift heavy objects. To improve and extend the functionality of these devices, graduates of Technology Monterrey (ITESM) develop an exoskeleton that works with artificial intelligence and is made up of several independent parts to rehabilitate specific body parts as joints through augmented reality. The device acquires motion with brain or muscle signals and measures simultaneously translated by the apparatus noninvasively. Dr. Ernesto Rodríguez Leal, professor at the ITESM, explained that the device can acquire motion by a headband containing electrodes themselves are responsible for receiving and calculate the electroencephalographic signals emitted by the brain and electromyographic produced by muscles. These electrical impulses go to a microprocessor which makes the task of sorting and translate the signals that move the device using artificial intelligence algorithms.