Domino's will track customers on their way to pick up pies

Domino's already lets customers monitor the status of their pizzas for delivery, but on Monday it will reverse that service, allowing pizza-makers to track the location of customers coming in for a pie pick-up. Anyone in the country who orders Domino's from a smartphone will be prompted to enable location-tracking on themselves, plus choose whether they're coming by bike, car or on foot. Domino's will start cooking the appropriate pizza once the customer is in range, so it comes out as fresh as possible, CEO Don Meij said.

Big-brother pizza: Domino’s to track customers on way to stores

Checking the progress online of your home-delivery pizza is so 2006. Now you're being tracked, too. Domino's Pizza Enterprises Ltd., Australia's largest pizza company, will on Monday start using satellites to follow customers as they approach stores to pick up orders. By tracking pizza-lovers on the street, Domino's can wait until the last moment to start cooking and ensure orders stay fresh, the company said Thursday. The fast-food surveillance measure comes a decade after Domino's started to let customers track their own orders.

You can soon order Domino's pizza from your car's touchscreen

Domino's is continuing its quest to let you order pizza through every device imaginable. It's partnering with Xevo on an app that can order pies through your car's infotainment system, no tethered smartphone required. You can avoid distractions by placing an Easy Order or repeating your last order, and track your food's progress. There's also an option to make an order by phone in case you have a complex request or just prefer human contact. The technology is expected to come pre-loaded on "millions" of cars sometime later in 2019, although Domino's and Xevo didn't name specific brands or models.

You can now order Domino's in Messenger using a pizza emoji 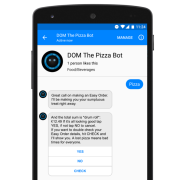 If you're a lover of pizza but not a fan of engaging in a conversation with anyone, you can now order Domino's Pizza using the Facebook Messenger app simply by sending a pizza emoji to a chatbot. In the pizza delivery chain wars, technology appears to be the way to win over customers, as Domino's has announced its latest tech innovation using AI chatbots in Facebook Messenger. Facebook announced back in April at the F8 developer conference that it wanted to double-down on AI, starting with chatbots being made available for businesses. Since that announcement, a number of companies have already signed up to these chatbot services, including Uber, Spotify and Dropbox, as a means to get greater access to the 1bn Messenger users. In Domino's case, its chatbot is referred to as'Dom' and it will allow you to order pizza to your house simply by typing the word'pizza' into the chat, or even just putting in the pizza emoji.

You Can Now Order Domino's Pizza Through A Facebook Messenger Bot

After successfully launching a Facebook messenger chatbot in the UK and Ireland that takes customers' pizza orders, Domino's is now making the feature available stateside. Starting today, Domino's says customers with a "Pizza Profile" on the chain's website can place their orders via Messenger by communicating with a bot. Because at least pizza is a comfort when you think about how artificial intelligence will one day vanquish the human race, right? Customers can place and track their orders by clicking the message button on Domino's Facebook page or by searching for Domino's within the Messenger app. If you don't feel like using your words, you can also just send a pizza emoji to get the ball rolling.